The Vegan Quinoa Bowls of Your Dreams
Skip to content 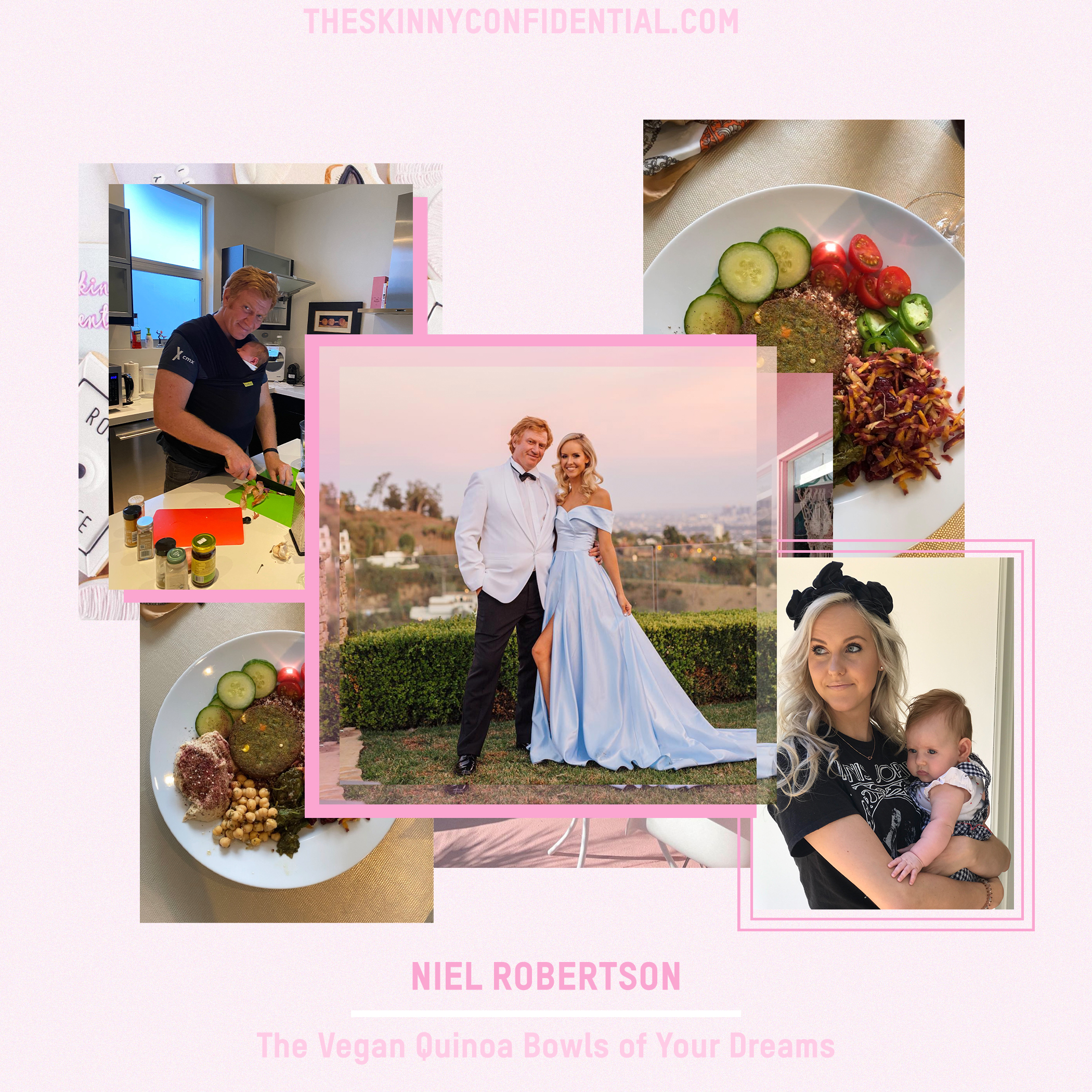 Recently I went to Palm Springs with a bunch of my friends & we stayed at the cutest, most incredible little private hotel called The Marley.

Everyone had to cook a meal each night & my friend Niel decided he was going to make his favorite quinoa bowl that my friend ( his wife ) Faith always raves about. She’s a pescatarian & such a health eater. She’s super strategic about her meals so I was super excited to try it.

So while we all sat outside drinking skinny margs, Niel got to work in the kitchen & whipped up this amazing meal. The meal consisted of quinoa, kale, homemade hummus, delicious dates & tons of other yummy things.  All I can say is that you will not be sorry after you make these delicious, vegan quinoa bowls. I’ll be making these at least once a week.

Niel is one of my favorite friends & someone who I’ve traveled all over the world with. So it’s special to bring him on the blog. You should also know he’s the founder of Influence.co, the world’s largest community of influencers, creators & the people that work with them.

If you’re an influencer you have to check it out. Oh, & Michael & I each did an interview with Influence.co so be sure to check out mine here, & Michael’s here.

Ok with that I’ll let you get to Niel’s recipe for vegan quinoa bowls. It’ll rock your world.

This quinoa bowl was inspired by hundreds of Australian coffee shop lunches with my wifey Faith, who I met in Sydney. If you have been to Australia then you know the best things about it are the coffee & the food ( & the hot women named Faith ). Not only does every coffee shop serve food, but they serve the most amazing, inventive & colorful bowls & salads. This is my take on this Australian staple.

The bowl itself is really easy to make, something you can experiment with, & works because it brings together a lot of little flavors that go nicely. We like to make all the side dishes ( the mezze ) & then let each person stack it the way they like. I’ll say up front that I’m a “dash of this” or “3 count pour of that” kind of chef so these measurements are estimates at best. With these flavors it’s pretty hard to go wrong even if you switch the measurements around to your taste.

The process is pretty basic – put the quinoa on & then race to see if you can make everything else before it’s done. Extra points if you can clean the kitchen by then too. 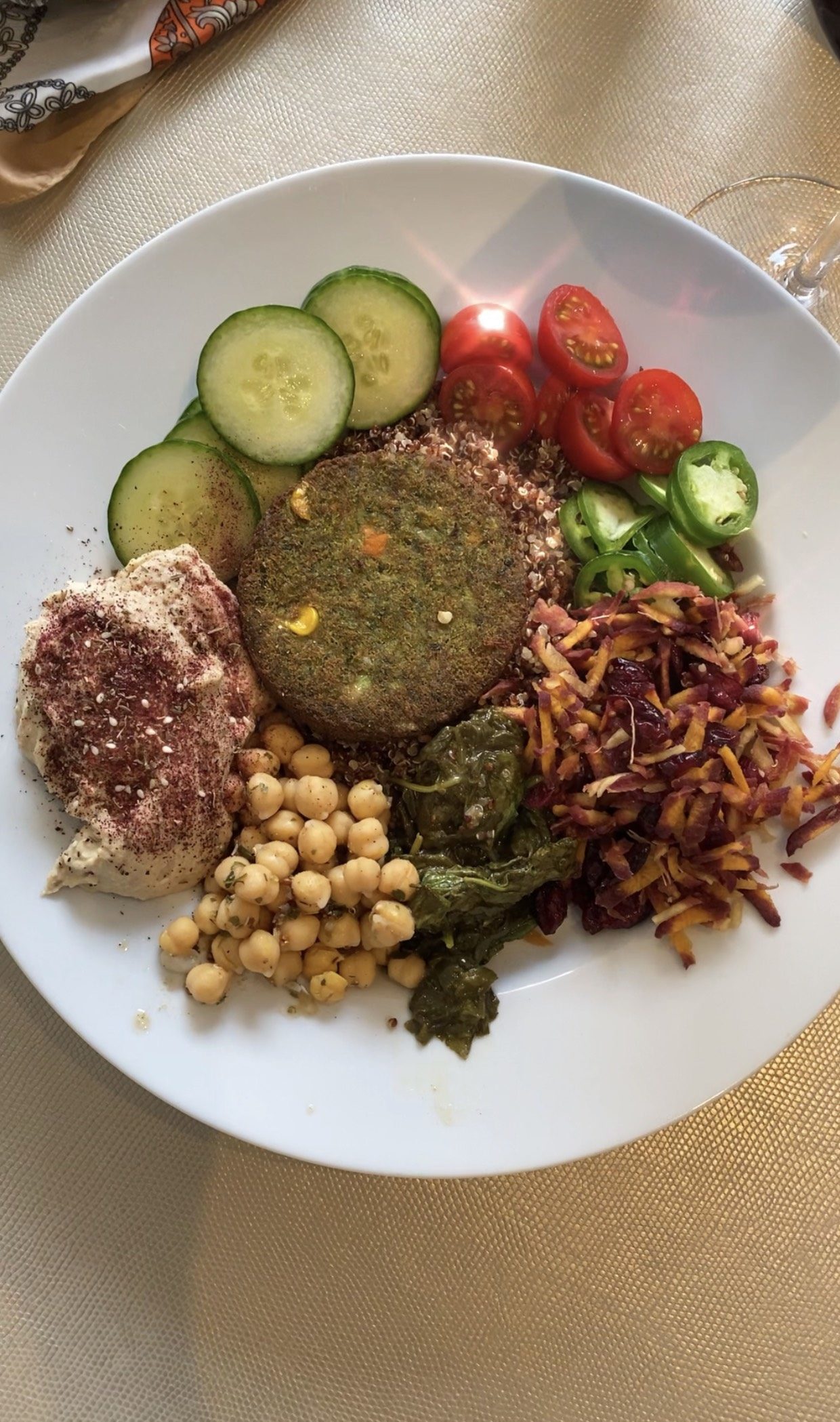 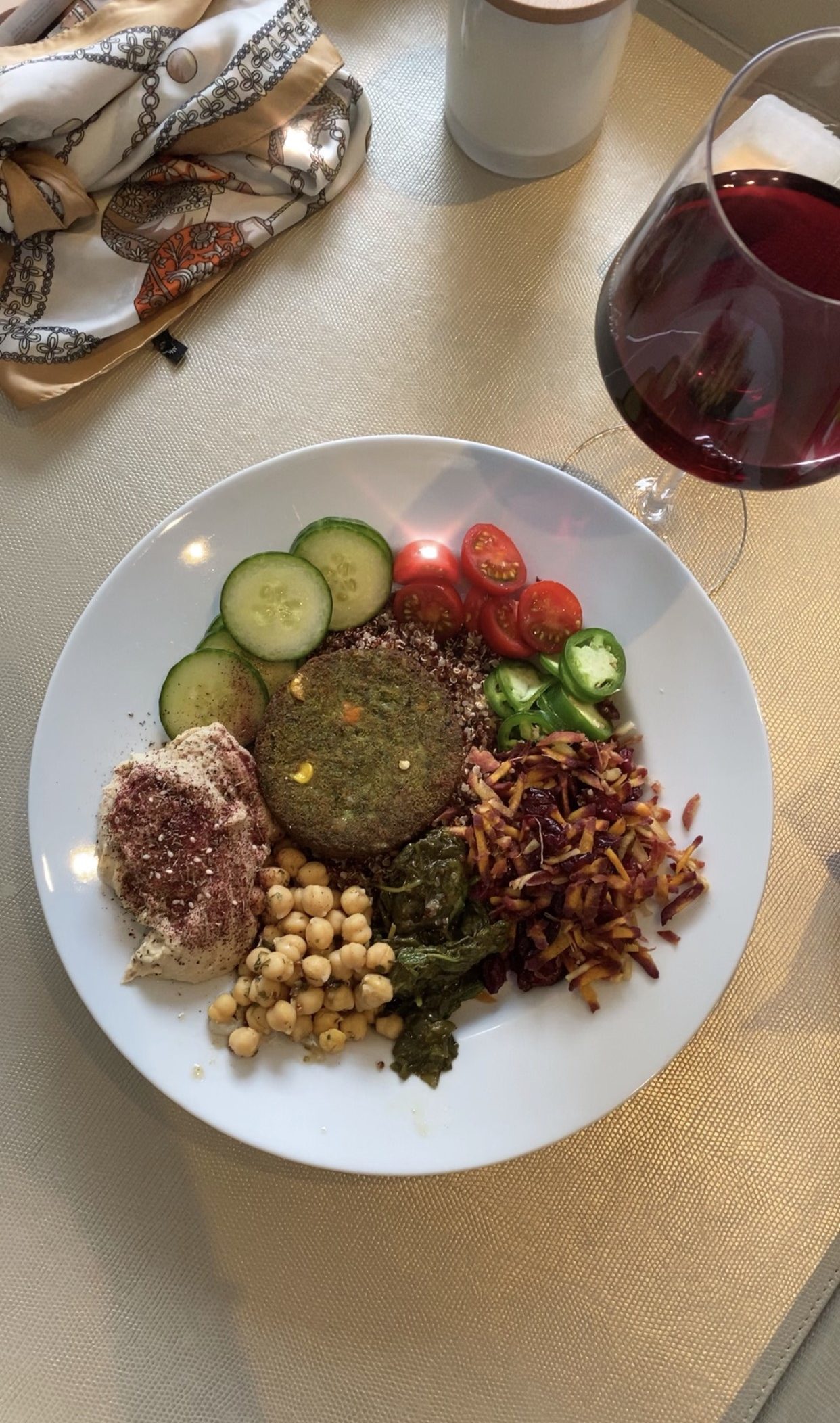 + 1 cup quinoa
I like the thicker darker quinoa that doesn’t turn into mush when cooked.

+ 2 tbsp rice vinegar
substitute with any type of white vinegar.

+ 2 tbsp soy sauce
we prefer to use liquid aminos which are the same.

+ 3 tbsp olive oil
any level of virgin you want.

+ ½ teaspoon white pepper
substitute with ground black pepper as you like.

+ 1 tsp zatar ( optional )
I make my own but you can also buy it in the store or even just use a pinch of sumac. This spice blend will change your life once you know about it. Here is a great recipe from Cookie and Kate.

Get that quinoa on the stove. Cook the quinoa however your package tells you. Try to keep it from cooking too long & being mushy.

Prepare the flavor mix. In a small bowl mix the rice wine vinegar, soy sauce, mirin & toasted sesame oil. Set aside until the quinoa is done.

We love to bake a veggie patty while the quinoa is cooking. I do it at 425F on a metal cooking tray so we get the outsides nice & crunchy. Our favorite is Dr. Praegers Kale Veggies Burgers, but you can use whatever you like.

Peel the carrots & then grate them like you’d grate parmesan cheese ( the biggest side of the grater ). Mix the cranberries into the grated carrots. So pretty!

In a medium saucepan on low heat, put a tablespoon of olive oil, squeeze the juice of a lemon, add the pepper. Take the kale & either rip off the leaves if it’s super leafy or snap off the bigger part of the stems if you want to keep some. Roughly chop the kale & drop it in. Stir it to coat it & then cover it to steam the hell out of that kale & make it soft. When the kale is fairly wilted you can stop.

Thoroughly wash a can of chickpeas while debating with your partner the difference between chickpeas & garbanzo beans. Put them in a bowl, squeeze in the juice of a lemon, 1 teaspoon cumin, the oregano, thyme & parsley. Mix it together in the bowl. That’s it.

Repeat after me. I. Am. Going. To. Make. My. Own. Hummus! Seriously this scared the hell out of me until I did it the first time. I now make hummus at least once a week & it’s better and cheaper than anything you can find in the store. I have taught many people in my family how to do this. It’s a game changer as hummus goes with so many meals & is so good for you! It takes less than 5 minutes, I swear to you. But if you don’t have time at least add some yummy plain hummus to the quinoa bowl as it really brings it all together. Okay, let’s do this.

How to Make Hummus:

Drain & thoroughly wash a can of chickpeas & set aside. Put the tahini, garlic, lemon juice of one lemon, 2 tbsp olive oil, 2 tbsp cold water, 1 tsp cumin & 1 tsp salt into a blender & blend it for 30 seconds. Scrape the sides down with a spoon. Add the chickpeas in. Blend. Keep adding little bits of cold water until you can blend it on HIGH consistently. Scrape the sides down one more time then let it blend for a minute. This last long blend is what will give it the creamy taste. Garnish the top of the hummus with a sprinkle of Zatar or sumac.

We just slice cucumbers & grape tomatoes & add them to give a nice cold crunch & texture. We love to cut up some pitted dates as well.

The last step is to pour the quinoa flavor mix into the quinoa & thoroughly stir. This gives a nutty, salty, Asiany flavor that grounds the rest of the citrus-based mezze. It’s so good you’ll want to eat a bowl of it ( hence the name ).

We like to lay the flavored quinoa out flat, put the burger patty on the top, put half a chopped avocado on top ( or a whole one if you’re Australian ) & then lay the mezze around the quinoa on the plate. That way you can mix & match flavors as you like.

So there you have it. The best, healthy, very Australian-esque quinoa bowls of your dreams. Feel free to add 100 slices of jalepeño to spice things up.

Be sure to follow @nielr1 & @faithyheart, plus @influenceco ESPECIALLY if you’re an influencer. Like,  we all need to stay up to date on everything you need to know as a creator & influencer, right?

+ check out the chic birthday party we threw for Faith.

++ scope the travel vlog from our south of France trip with Faith & Niel.

9 replies to “The Vegan Quinoa Bowls of Your Dreams”