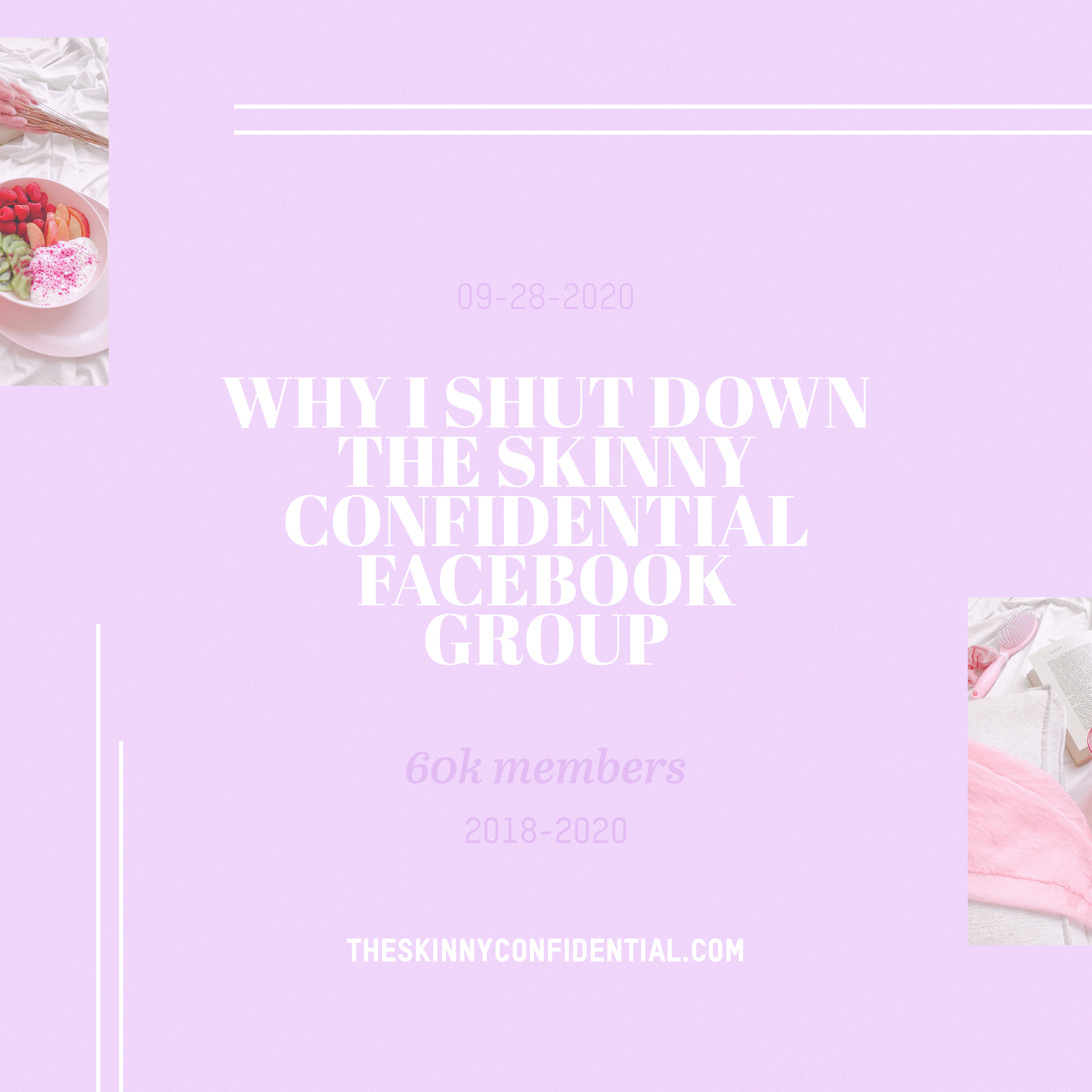 Recently on Instagram I wrote an open letter about why I shut down The Skinny Confidential Facebook group. Due to the overwhelming response to the letter and the questions from the community, I feel the need to further explain the reasoning behind shutting down the group.

First off, let me take you back to the original intention of the group and talk about why it was started to begin with. The group was meant to be a fun and relaxed space where women could share their tips & tricks & talk about anything from beauty, relationships, dating, hair, restaurants, fitness, fashion, and more- it was a resource like the blog where we could all come together to help each other out as women.

That point cannot be stressed enough: it was always meant to be LIGHT HEARTED & HELPFUL, while discussing the very real things that we as women go through.

In the beginning SO many amazing things came out of the group: friendships were formed, women found friends in new cities, BUSINESSES were started! Seriously, it was SO much more than I could have ever imagined, and it grew extremely fast. At times I couldn’t believe how fast it grew.

When we started the group, we set rules to help keep the group positive. As we went into 2020 with all the chaos that has occurred this year, those rules were set aside to try and allow for some measure of discussion since so many were faced with so much hardship. As things became heavier, we noticed the tone was also turning judgmental and negative.  I was bummed since my intention was for the group to offer a place for members to relieve a bit of stress After some debate I decided to give it one more chance. I had our admins on high alert and attempted to set more rules to keep the space positive.

But it didn’t help the situation. It actually made it worse.

After more brainstorming we decided it would be best to bring everything ‘in house.’ What I mean by that is I had The Skinny Confidential team members and interns moderate the group in hopes of trying to get it all under control. This still didn’t work. It kept getting worse. In our weekly meetings, the “hot button issue” was the groups turn towards negativity & judgement. All of us felt conflicted and unsure of how best to turn the tone back to what it was. The comment section was especially out of control.

To give you a micro example:

A member posted in the group asking if she should keep her hair long or cut it short. Some of the comments she received were:

“Who fucking cares about your stupid hair.”

“Get a fucking life, we’re in a pandemic.”

“How can you even be thinking about something like this right now? LOL- fuck your hair. No one cares.”

The Skinny Confidential has always been offered up as a kind of escapism for women, a feel good destination for members to come together. It’s not meant for political debate or judgement on morality. There are tons of groups on Facebook about politics, social activism, world issues, but this was always meant to be a space for beauty tips, hair styles, dating advice, etc. It was intended to feel like you were at a boozy brunch having mimosas with friends, sharing insights on lighter topics & LOL-ing over jokes.

As mentioned earlier I also fully expected everyone to go by the rules that were set from the beginning and that every new member was aware of the rules when they joined. Those rules included no politics, religion, attacks, selling, MLM’s- most importantly: NO HATE. They were set to keep a POSITIVE space where women could talk about the issues, we all face. Sharing things & helping each other was the goal, always.

This year has been so crazy & with that, some of those rules went out the windows so that we could try and discuss some of the issues 2020 has brought to all of us. It’s when we let the rules go, even a little that all hell broke loose. People were incapable of having discussions about these deeper issues without attacking each other and tearing each other down.

It’s very important to say that the discussion topics, the posts, & the things people wanted to share weren’t the main problem. The major problem was how people were treating each other in the COMMENT SECTION. Kindnesss was not the theme, and it became hostile.

Let’s go over that again: I didn’t shut down the group because of the TOPICS being discussed although I realize they were a departure from my original plan. Some people and some publications are alluding that I shut the group down because of RBG tributes or BLM posts or Covid advice, or the election. This is all emphatically UNTRUE! I shut it down because of the HATE being spewed in the comments between women who originally came to the group to uplift other women!

To give the full picture, here are some screenshots that showcase the point: 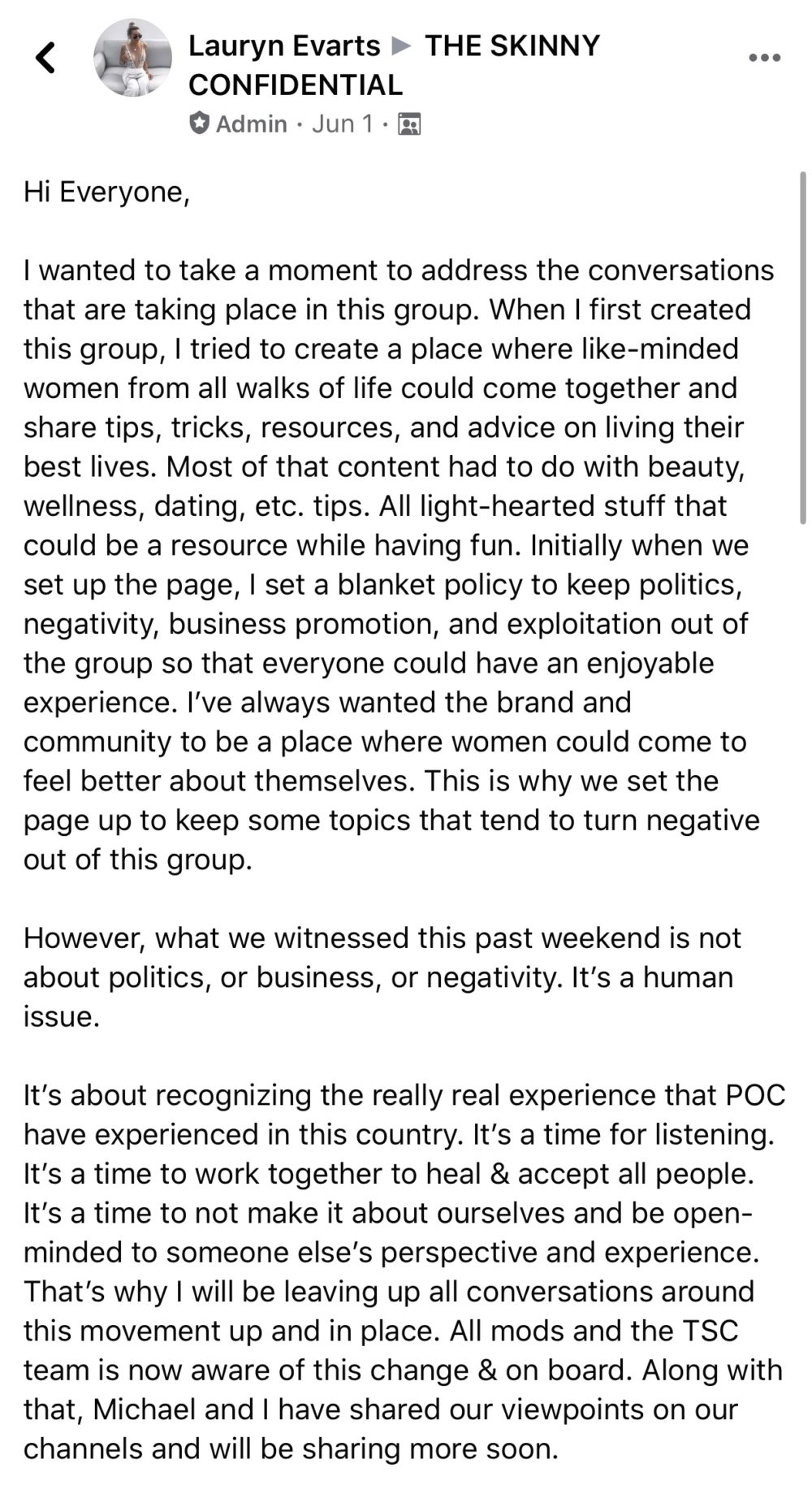 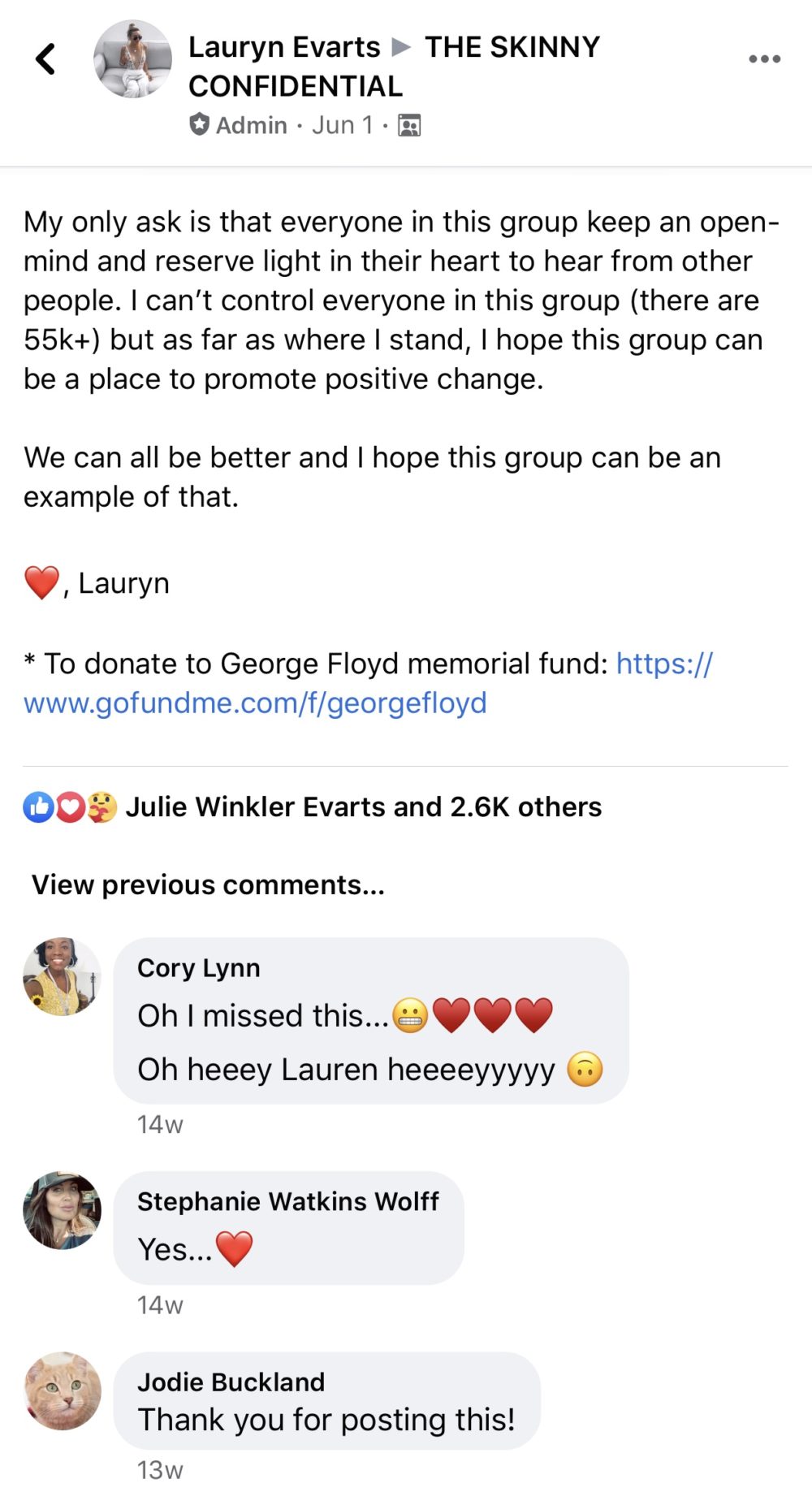 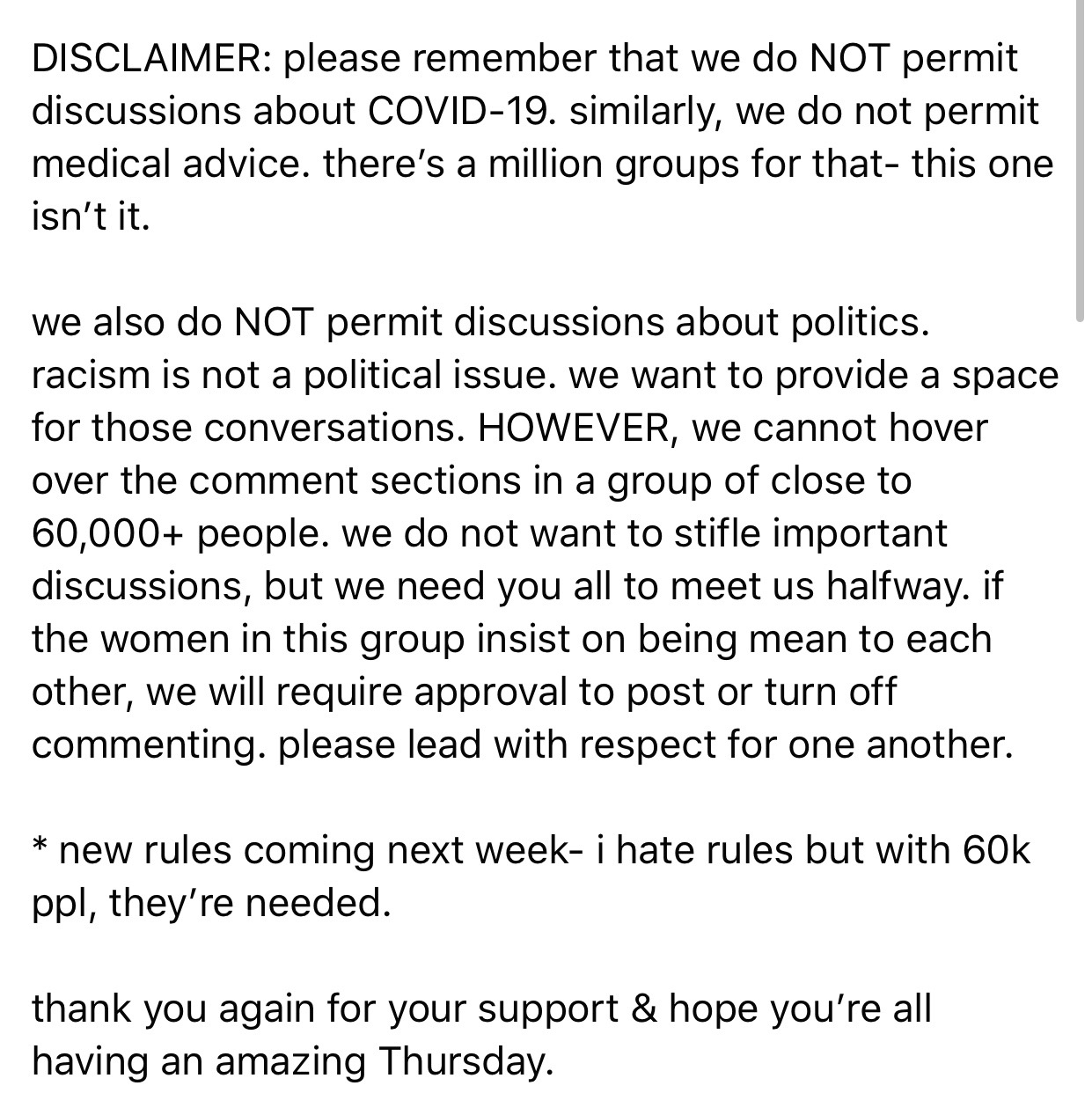 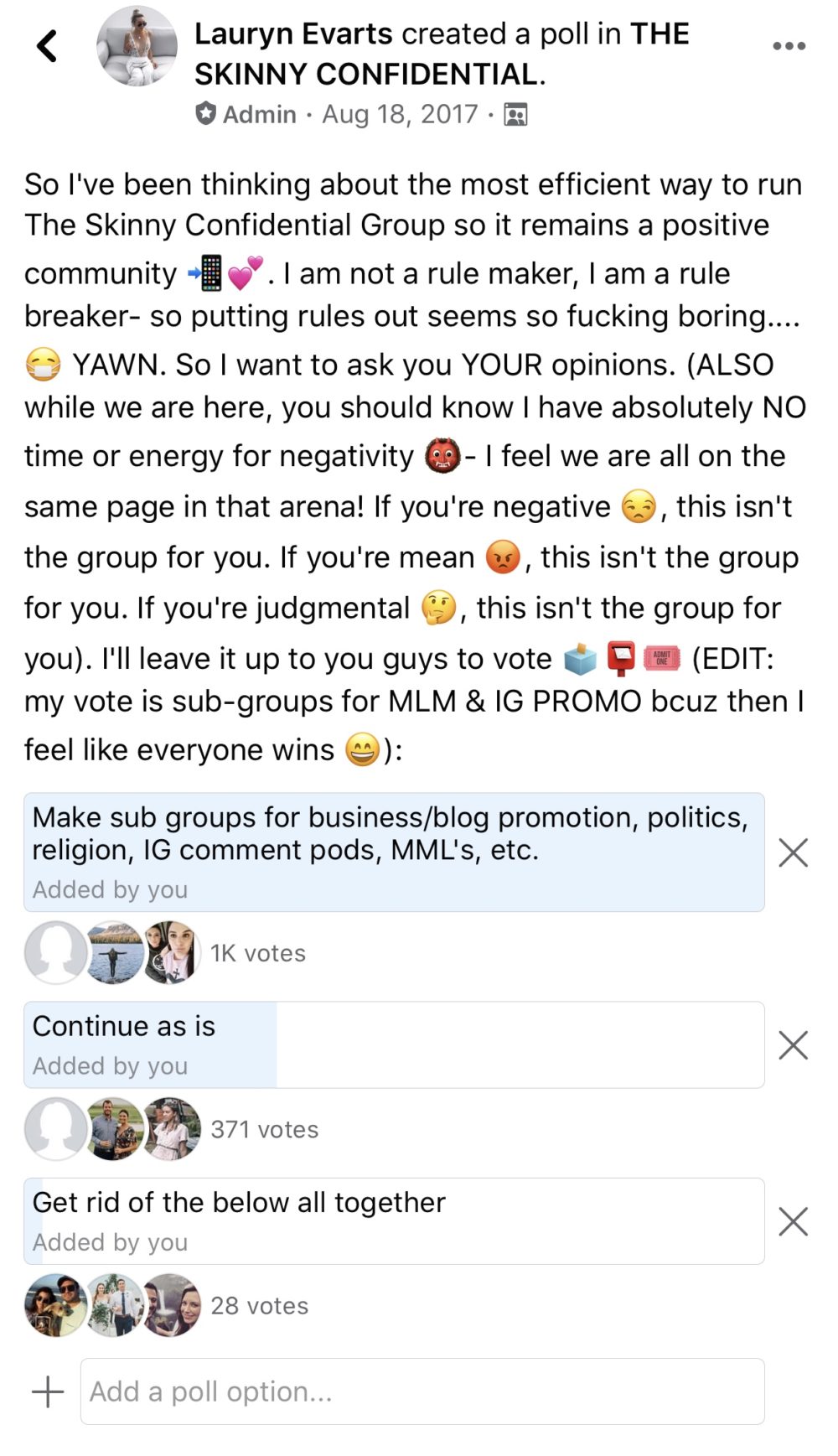 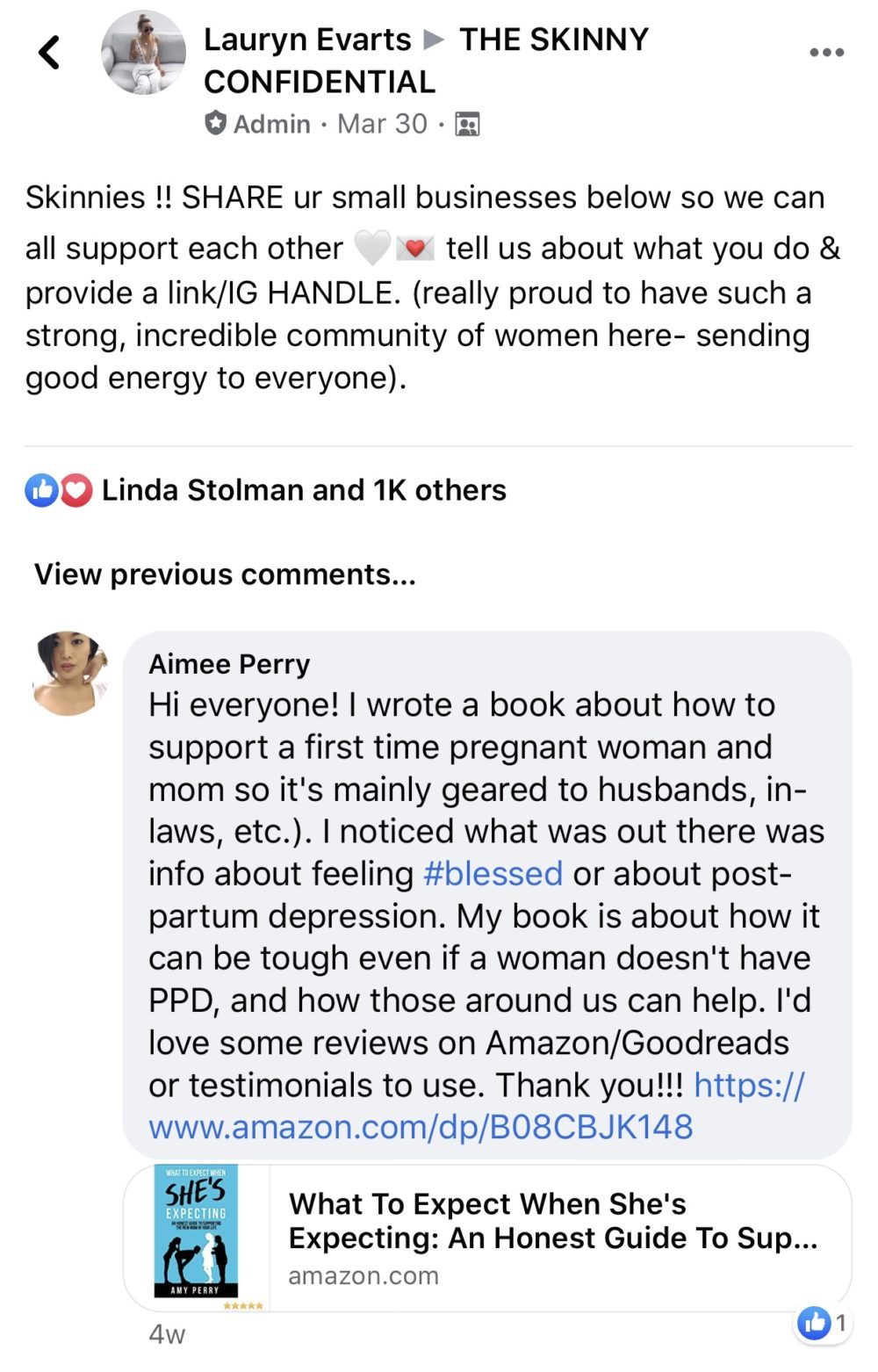 It very quickly went from women forming new friendships to strangers telling other strangers to fuck off and kill themselves. People who don’t know me, my platform, or what we stand for had also entered the group & it became a VERY negative space VERY quickly.

1. Let all the members of the group post anything they want. Break all the rules, go wild & let it turn into a negative space.

2. Moderate the group with our internal team (which is small and not built to moderate FB groups). We did this, but it put us in a position of trying to pick and choose what got posted and what didn’t, so then we were under fire for just trying to decide. We couldn’t keep up. To be honest, Facebook can’t even do this effectively themselves, so how can my small team do this for 60k + women? It became impossible to moderate for such a small team.

3. The last option was to archive the group completely, end the negativity, & take a breather.

After many discussions, option 3 ended up being the best alternative. We honestly couldn’t think of a fourth option but if anyone out there can we are open to feedback/ideas.

Now that the group is shut down, I personally am getting attacked. People are saying horrible things about my family & my daughter. DM’s to me telling me to kill myself, I am a bad mother, even messaging my husband (who built an entire company that does nothing but uplift women’s voices through audio). You can check out the latest episode with Dom Roberts here where a lot of this stuff is addressed.

…which just further proves why this group had to be shut down. It became a hateful negative space where people were unwilling to listen to others and instead turned to spiteful attacks.

I’ve said this on stories & I’ll say it here: some of you say I am silencing women. You are correct. I am silencing women set on tearing down other women. It’s one thing to post tributes to iconic women or to bring up social issues, it’s a whole other thing to use those tributes or issues as opportunities to spread hate and bully people online.

Why should I subject this incredible community to daily hate on Facebook? There are so many of you that share my sentiment and don’t want to be part of a negative, hateful space. That’s not why you read this blog, or so I hope!

So yes, the group is shut down & will stay that way for a while. It was important for me to address this to you direct, on the blog. I am sure many of you have had questions, I am sure some of you had also already made up your mind. Now you have my version and my response.

On another note: THANK YOU to the many members who made the group so much fun, provided many laughs, gave so much VALUE- you made it an amazing space for women all over the world for years. You rock and I will always be so appreciative to you.

In the future I look forward to keeping things positive. Life is too short for anything else.

“Hate, it has caused a lot of problems in this world, but it has not solved one yet.” -Maya Angelou