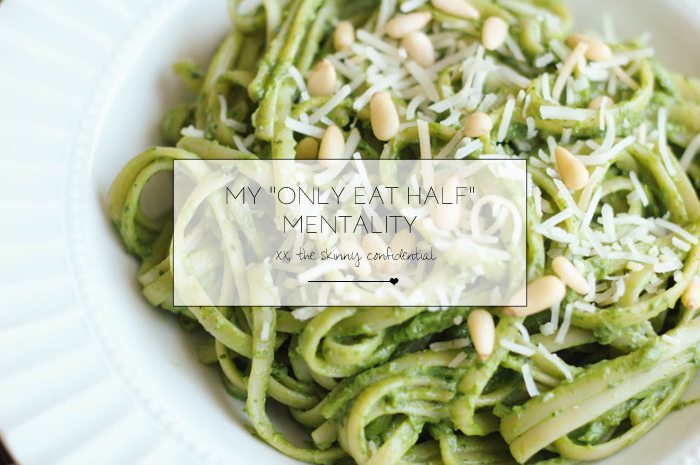 I always only eat half.

Now it’s become such a habit that it’s something I just sort of do.

This little habit was picked up when I was attending San Diego State. Being a bartender I was constantly surrounded by delicious ( more like rich ) foods so I decided ‘shit, I want to enjoy my life…but in moderation.’ So every time I went out to eat ( or ate at my workplace ), I’d only eat half.

Since traveling is a big part of my life now, it’s definitely still a rule of thumb: only eat half.

First off, the portions are out of control in America as it is. I mean really though, have you guys been to The Cheesecake Factory lately? The portions are just absolutely ridiculous. Their entrees could serve a small country.

& ultimately I am a big believer in something called THE LONG GAME.

Playing the long game means seeing the bigger picture in every aspect of life. The short game doesn’t interest me. In fact, it’s kind of boring. & I’m up for the challenge of the long game. The way I ( try to ) eat is definitely for the long game. Small moderations every day, add up in the larger game of diet/health. Instead of starving myself for days to eat a huge bowl of pasta ( the short game ), I’d rather enjoy small portions of pasta a couple times a week when traveling, have a few bites, & move on with life.

Is anyone with me on this?

This is how I order: typically I split an appetizer with Michael ( I like to go with proteins like ahi or Burrata Cheese covered with olive oil, tomatoes, & basil, the protein sort of fills me up so I’m not starving for a huge entree ). And then for my entree I’ll always order an appetizer, pasta, burger wrapped in lettuce, or a piece of fish ( sometimes I like grass fed steak too ). If I order the pasta, I will only eat half. ALWAYS. If I order an appetizer as an entree, I try to eat until I feel full instead of licking the plate clean. I sort of use my best judgement. If I order a beautiful piece of salmon, I’ll eat the salmon & veggies & only eat half of the rice. If I order a burger ( medium rare, add jalapeño, & extra avocado ), I cut it in half.

(…unless of course I’m in like Venice, Italy having the most romantic dinner ever with the best bottle of red wine & handmade pasta with Farmer’s market tomatoes…but you get it ).

This post is just to share a little eating out tip that I practice and I feel like it makes a BIG difference in the LONG run. Also, I always feel satisfied. If I want a few bites of dessert, I’ll have some & move.

Oh, & another weird thing I do: I always order peppermint tea to end a meal. There’s something perfect about it & it leaves me feeling super full. Weird…?

Ok, so do you guys have any random habits like this? Any small habits that you think make a long term difference?