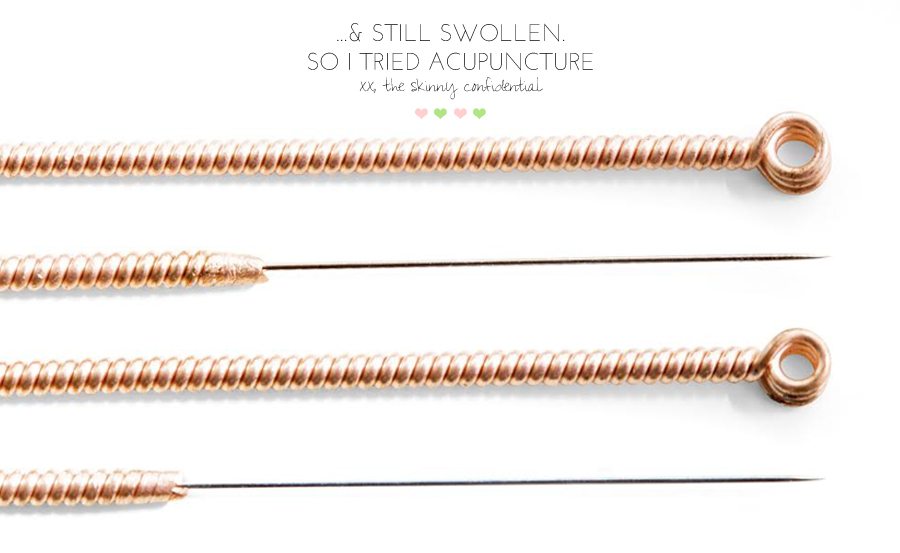 So I am still swollen.

The doctor said with jaw surgery it can take a full year to go completely back to normal. It’s been about 6 months so I kind of, sort of have a way to go.

Most people don’t even notice I’m swollen, but it’s weird because obviously I know my body…& I can really just feel I’m still swollen.

In some areas I’m still numb too, which is entirely normal after jaw surgery.

So on that note, I wanted to share something with you guys that’s really been helping my swelling: ACUPUNCTURE.

Now let’s get one thing straight, shall we?

LIKE it’s difficult for me to even stomach the photo above. EW, EW, EW.

I legit have Vasovagal…aka known to faint.

Pretty much needles gross me out more ANYTHING.

So it’s a bit odd that I actually like acupuncture.

To be real, acupuncture was a big NO in my book until 2 months ago. A lot of my friends recommended going & I flat out refused.

Then one morning I woke up & said, “F IT. I’m trying acupuncture for this damn swelling. What do I have to lose?”

So off I went to Mr. Acupuncture-ist.

After arriving at the office I was taken to a tiny room.

HA. I was hardly relaxed. Needles all over my body? Thanks, but really no thanks.

I laid down on the table, closed my eyes, & began to really listen to the mediation music.

First off he told me my lymph nodes were still swollen a bit. So he popped the tiniest, thinnest needle into each lymph node.

Immediately I got this sensation of relaxation. It was almost like my lymph node relaxed outward away from the needle.

Sounds strange, but I swear I’m not making this up.

Then he told me he could see the swelling around my jaw line, chin, & lips. He placed needles in specific points around the lower half of my face.

The lip area was the most tender because there’s A LOT of nerves by your lips.

Actually in retrospect, I would say the lip area ‘hurt’ the most on the whole body. Now when I say ‘hurt’ I don’t mean like it really hurt, I just mean it was a bit uncomfortable for a second.

After that area , Mr. Acupuncturist placed a needle in the middle of my forehead to promote relaxation.

Oh me, oh my did it promote relaxation.

Immediately my entire body relaxed. IMMEDIATELY. Total witch doctor, voo-doo shit but I SWEAR I was so, so relaxed.

He then went on to place needles in my feet ( a vulnerable spot for some reason…I didn’t LOVE my feet area being touched ), my hands, & another point on my neck.

The weirdest part of the whole experience is when he slightly pushed the needles in a bit more. WEIRD, WEIRD, WEIRD. But not painful.

When all the needles were in ( it took like 3-ish minutes ) he announced he was leaving the room for a bit. Mmmkay.

Without having any stimulation you’d think I’d be bored. But actually I really wasn’t bored at all, I was completely relaxed. I would go as far to say I was in a full blown meditative state. RAD. Especially for someone like me who’s constantly high strung.

To describe the experience more in depth: the needles almost act as relaxers. Once a needle is placed somewhere specific your body sort of relaxed outward from that spot.

After about 20 minutes he came in, removed the needles ( & kind of woke me up ), flipped me over ( that sounds risqué ) & cupped me.

…Wait, get your mind out of the gutter. He CUPPED ME, like he performed cupping therapy on my back. That’s for a whole different post though. We’ll save that for later.

SO, acupuncture! He said results would happen in 12 to 24 hours.

I said goodbye & off I went.

Fast forward to about 5 hours later & bible, my swelling on my jaw area was down 50%. I can’t make this up. No one is making me say this. It’s a fact.

Then 10-ish hours later it was down even more. Literally I could not believe what a difference there was— my still swollen area was WAY, WAY down.

Actually the peacefulness of the entire experience was kind of addictive.

Here’s the thing: I’m a big believer in Eastern medicine & holistic practices. Especially after traveling to Beijing, China. There’s so much to learn, so much information, & proven history.

It also is KNOWN FOR REDUCING INFLAMMATION.

So I’ve been back every week since. I love it so far. Will keep you updated.

For any of you wanting a more clear explanation? Well basically “acupuncture is a traditional Chinese method that uses pressure points located in the hands and feet to treat a variety of conditions. Acupuncture is a form of alternative medicine and a key component of traditional Chinese medicine involving thin needles inserted into the body at acupuncture points. It can be associated with the application of heat, pressure, or laser light to these same points. Acupuncture is commonly used for pain relief, though it is also used for a wide range of other conditions. There is a diverse range of acupuncture approaches, involving different philosophies.”

If you’re dealing with any of the above I highly recommend you find someone who specializes in acupuncture. Give it a try & let me know what you think.

And of course, if you’ve done acupuncture before, SPILL, SHARE, DETAILS below.

Oh! & if you just want a quick laugh? Head over to Snapchat to see The Nanz talk about BJ. She’s just like acupuncture, I swear she really helps with stress levels ; ).

Until next time, lauryn x

+ & as always, do your own research! Consult your doctor before trying anything new or out of your comfort zone | via.