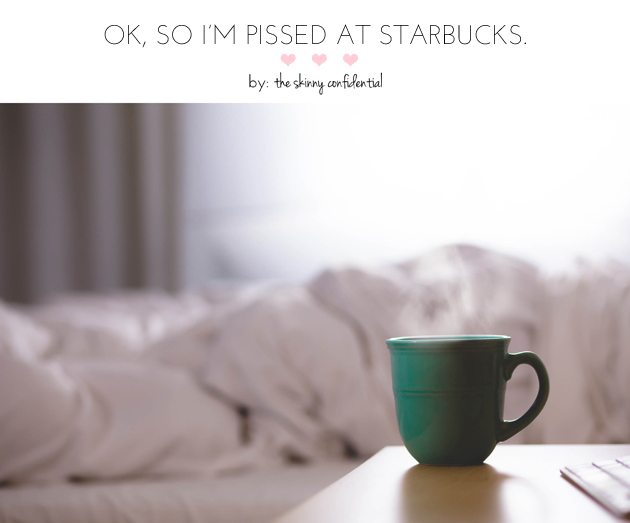 I’m sorry but Starbucks is manipulative.

While I do love their green iced tea with a splash of passion, I’m still very annoyed.

Here’s why: recently they announced that they’re carrying coconut milk.

The truth is, it’s full of shit. Literally.

Natural Society breaks it down for us simply…here’s what’s in the ‘healthy’ new alternative:

Tricalcium phosphate – Moderately safe, but can still cause problems.

“Natural flavors” – We all know how ubiquitous these can be – many ‘natural’ flavors were nothing more than chemicals in multiple food trials, but Pepsi-Co and others have had to pay millions to force them to take them out of our food and stop calling something carcinogenic “natural.”

Carrageenan – A strange food stuff that causes inflammation. ( REMEMBER I DID A POST ON THIS CRAP? ).

Gellan gum, xanthan gum, and guar gum – Indigestible gums that can have a negative effect on your gut flora and cause diarrhea. ( Ewwwww ).

Corn dextrin – This is probably used as a thickening agent, but is also likely made from GM corn since so much of it is planted throughout the US now.

* Also it’s non organic, not fair trade, & bad for the environment according to this source.

So, uh what the hell Starbucks…this isn’t coconut milk. It’s fake as can be.

The thing is I’m not going to nit pick every single thing chemical or ingredient I ingest but when it comes to something I drink daily ( a cup of coffee ), I want it DONE RIGHT, 100%, A+, ya know? And that’s non-GMO coffee with REAL coconut or almond milk & a bunch of organic cinnamon.

Is that asking too much?

I really don’t think so?

Millions of other people love their Starbucks so when it comes to calling them out, I’m coming from a place of wanting all the info before ordering a cup of Joe with “coconut milk.”

Starbucks is simply capitalizing on the latest health & wellness trend.

I for one will still be drinking my coconut milk…this kind is my favorite one to drink because there are barely any ingredients, from Thailand, & organic. I ordered it off Amazon & it’s delicious!! Goes well with coffee, smoothies, oatmeal, &/or in soups!

So yah, that’s what going on today, I’m pissed at Starbucks.

62 replies to “STARBUCKS IS ANNOYING.”