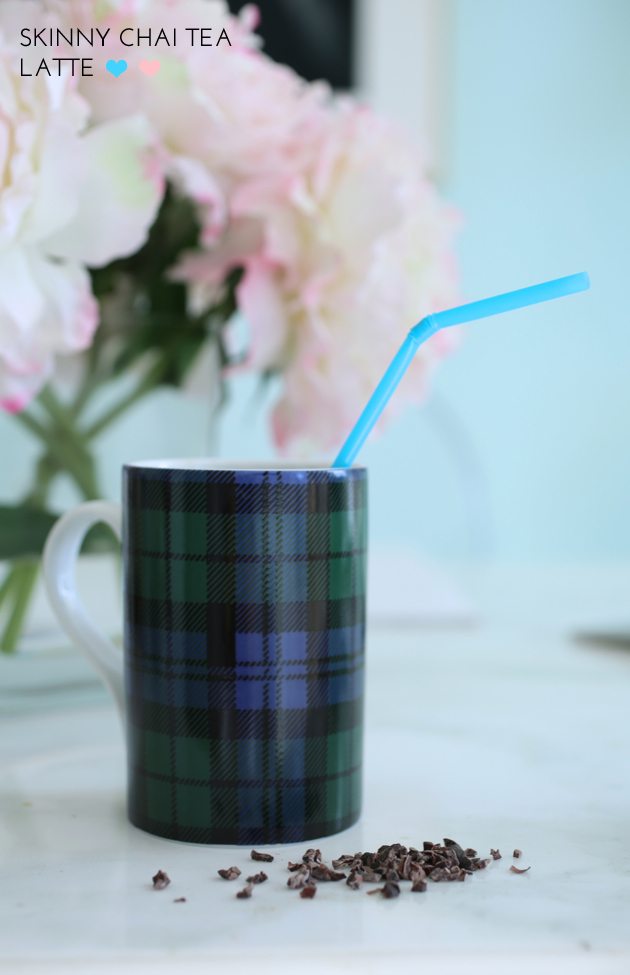 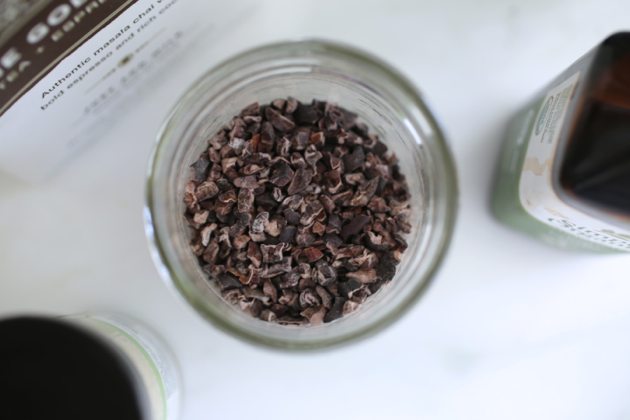 I was obsessed circa 2001— you could always find me with my Starbucks hot chai tea rocking a white Abercrombie peasant skirt, Roxy sunglasses, & French manicure gels. For some reason there was something so cool about showing up to high school with this entire get-up…chai tea latte included.

And then I found out the Starbucks version had like six million grams of sugar ( according to my friend “more than like, 20 mini Snicker’s bars, Lauryn. EW!” ). So I banned chai tea & stuck to boring, plain coffee.

Because I found a way, guys, to whip up an easy, low sugar, skinny chai tea using a new favorite from Celestial Seasonings. 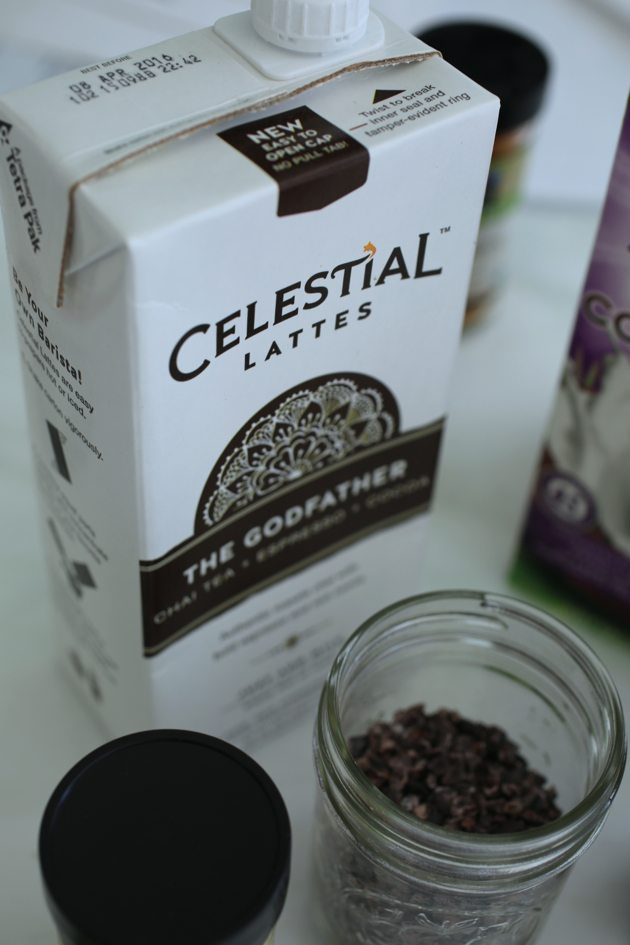 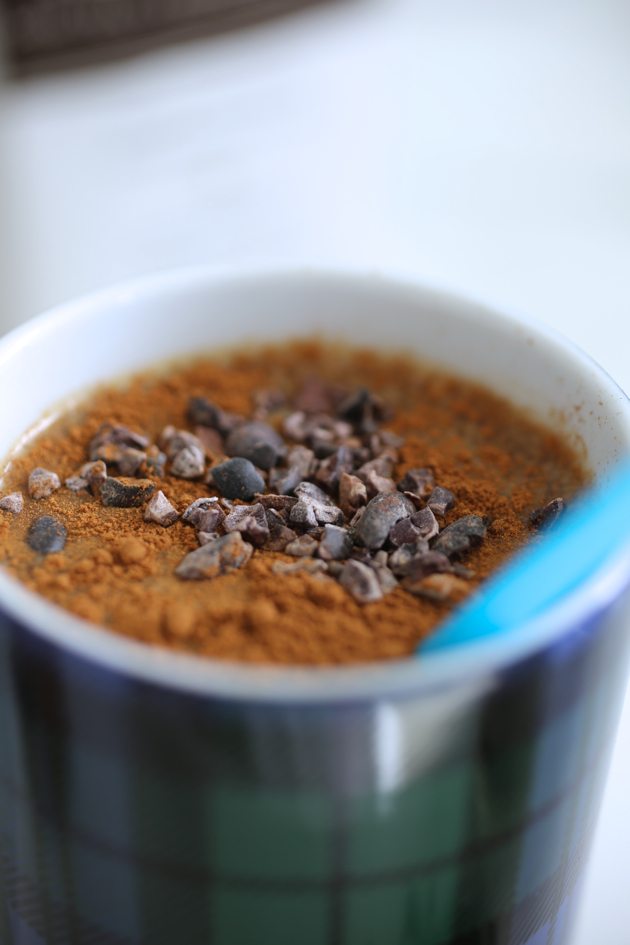 This recipe will take you like one second to make, you’ll get an awesome coffee buzz, & it’s full of super foods! YES.

Basically all you do is this, mix:

Directions: I like to shake the above in a martini shaker, pour over ice, & garnish with extra cinnamon and raw cacao.

Cheers to a damn good buzz! 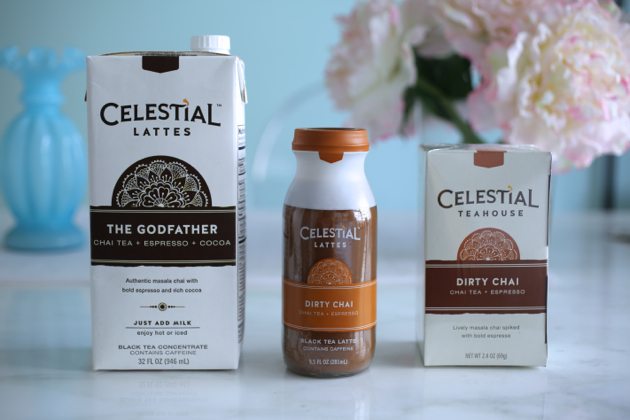 I used the Celestial latte concentrate ‘The Godfather’ flavor ( which allows you to add the milk or non-dairy alternative of your choice ). It’s an authentic masala chai with a bold espresso & rich cocoa flavor. It gives the mixture a coffee, chai tea, espresso taste. AND provides the buzz. You can find this at Target ( favorite store ever ). I’m obsessed— [perfect for someone who’s constantly on the go. Also, Celestial Seasonings ( #TB, THEY CREATED SLEEPYTIME TEA!! ) just launched a new line of ready-to-drink chai tea lattes. So not only do they have this “Godfather” version, they also have a Mountain Chai, Dirty Chai, & Matcha Green. Oh &, if you’re into bagged teas instead of pre-made, they also have a dirty, coconut Thai, & mountain chai. MMMmmm. I’ll do a post on my favorite bedtime chai tea later this month ( I love to drink it in bed with 3 ingredient almond milk cookies…YUM ).

Can you tell I’m having a chai tea moment? LOL.

On to the next ingredient: the unsweetened coconut milk gives the skinny chai tea some healthy fat. Plus it thickens the mixture making it taste AMAZING. 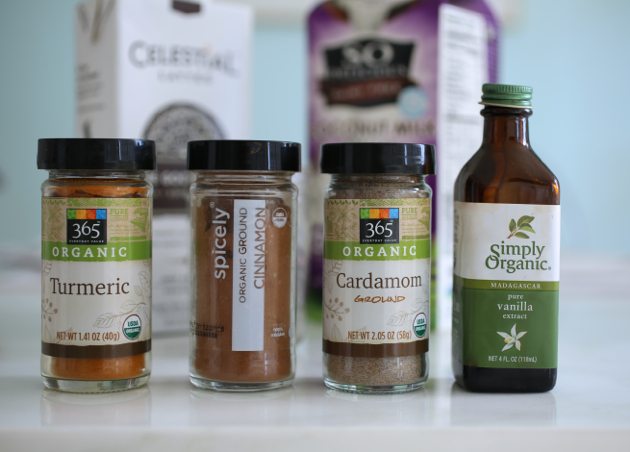 Vanilla extract enhances the taste. Don’t over-do it. A little goes a long way. Plus it’s full of benefits: “natural vanilla extract contains numerous antioxidants, including vanillic acid and vanillin. Antioxidants protect your body from damage from harmful components, such as free radicals and toxins.” ( source )

Cinnamon is the perfect compliment to coffee ( especially since coffee can screw with blood sugar levels ). I know I talk about this every second but for those of you who haven’t heard me say this: cinnamon can slow the speed at which the stomach empties following a meal, which can help control sharp rises and falls in blood sugar levels. Softening these sugar spikes can theoretically reduce cravings.

Turmeric should be a mandatory spice. Lately (especially since I had surgery & I’m so damn swollen) I’ve been using in it in my fresh juices, smoothies, soups, & in my coffee. It’s a total anti-inflammatory.

Lastly, cacao nibs…these add a kick to the chai tea & cacao is a total super food ( << it’s delicious on steel cut oatmeal too! ). The chocolatey flavored nibs help to destroy free radicals in your cells & tissue.

Also, if you want to get crazy, add some coconut or almond milk ice cubes.

+ more recipes like this can be found in TSC Bombshell Body Guide. 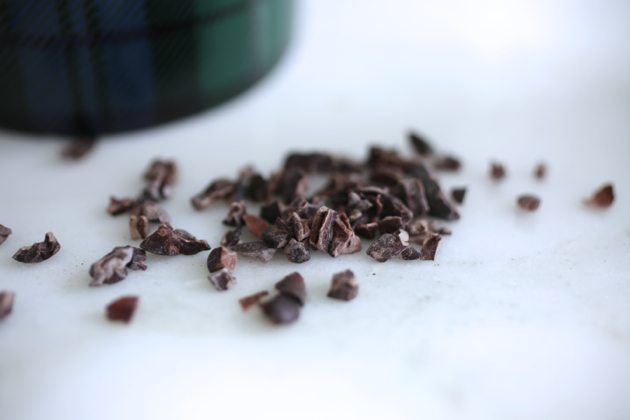