Self Medicating The Pain | The Skinny Confidential
Skip to content 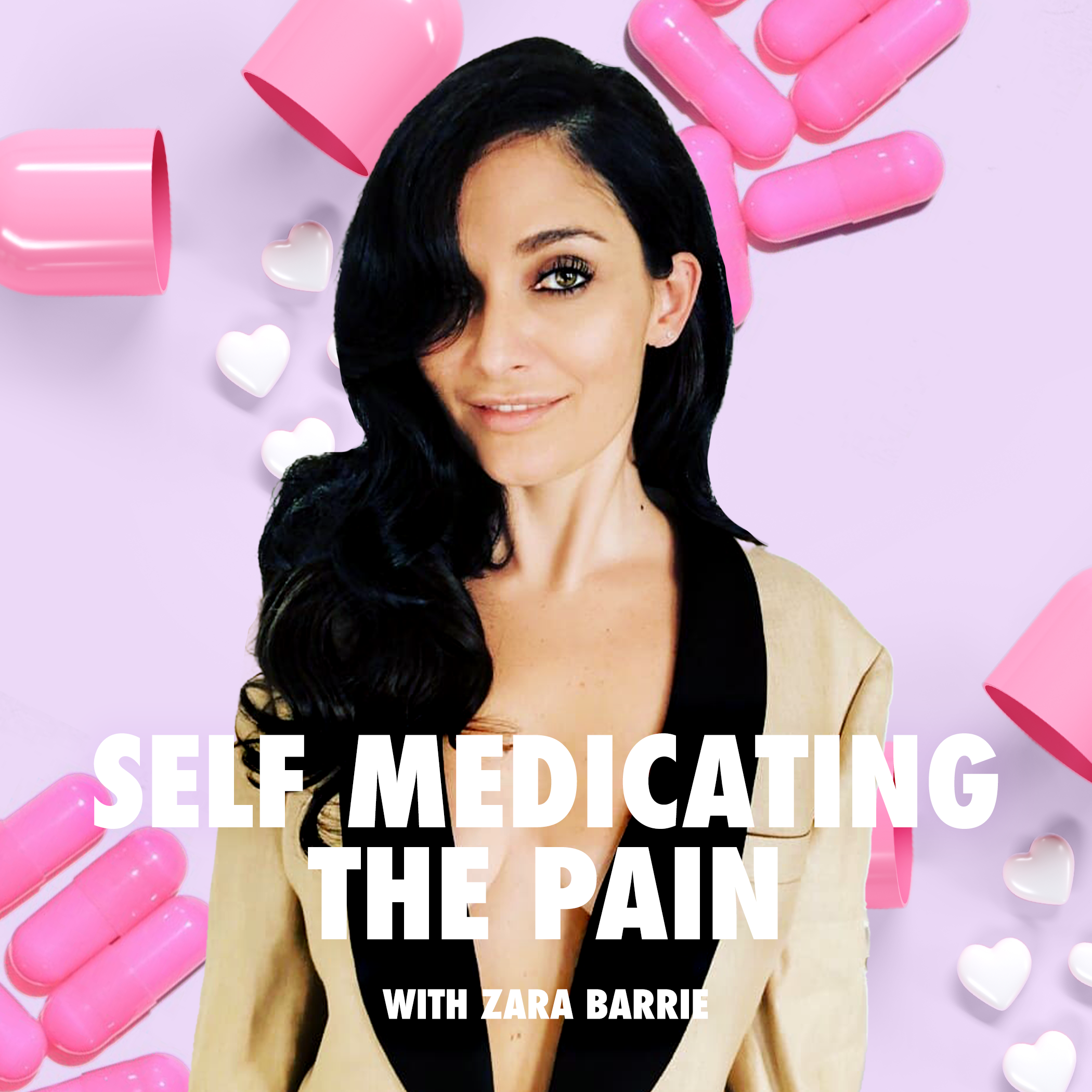 Zara Barrie is back on the blog today. You might remember that she came on the blog last year where I interviewed her about her book Girl, Stop Passing Out In Your Makeup: The Bad Girl’s Guide To Getting Your Sh*t Together. How can you not notice a book with an amazing title like that?

Anyway, just for a recap…

Zara has been a huge supporter of The Skinny Confidential & is a total hustler. She’s kind of a ‘bad girl’ in the best way possible, beats to the tune of her own drum & is smart as a whip.

She’s a writer, author, entrepreneur & I’m just so happy she’s back for a…..

She’s going to tell us about some unexpected ways she numbed the pain she was going through at one stage in her life & share the moment she knew she had to confront her pain.

This post is heartfelt & meaningful & I hope you love it.

Self Medicating The Pain

“Zara, I love you babe, but you really can’t seem to handle your liquor these days…” My friend, Lilly, who is a five-foot-eleven tall glass of champagne, a professional lingerie model with eyes the color of the Caribbean sea, purrs to me in a prim English accent. Cigarette smoke dances out of her pouty lips with the grace of a ballerina.

She drops her Marlboro Light 100 and stamps it out with her white converse sneaker.

My vision is as blurry as a windshield on a freezing-cold-day but somehow defrosts into perfect focus as my eyes hone in on her shoes. She’s wearing sneakers. Flats. Never in my life have I worn flat shoes on a night out. I’ve been teetering around town in painful heels since I was thirteen, the age in which I was informed I’ve been cursed with the dreaded fate of not having gazelle-long legs. Sometimes I joke with my friends, “After one drink the heels hurt less. After three you can’t feel the pain at all.”

It’s a metaphor for my life but I don’t know that yet.

My vision goes back to blurry as I gaze at Lilly, who is smoothing down non-existent flyaways from her frizz-free head. Her hair looks like two silk curtains that frame the most evenly proportioned face I’ve ever seen. I feel messy around her. Not just because I’m on the verge of a blackout and she’s classily buzzed. Being around Lilly is like looking into a mirror and seeing a pristine reflection of everything I’m not. Lilly is Amazonian tall, I’m Jewish and small. Lilly looks as if she’s just stepped out of a Ralph Lauren ad, I look like I’ve just stepped off the set of Girl, Interrupted. She’s a shiny blonde; I’m a disheveled brunette.

Me? I’ve run laps around all of those blocks, babe.

The shame I feel tonight, taking in the image of Lilly, is so intense it cuts through the protective armor of alcohol. I want to cry.

But I’m in England. In England, we don’t cry. We drink.

I stumble over to the bar and order a double vodka soda. A dude in a plaid button-down with aggressive red shoes marches toward me and hands me a shot of tequila.

“Why did the man push his wife off a mountain?” He asks me with big, unpredictable, amphetamine eyes.

He holds out the shot of tequila, proudly like it’s a shiny gold trophy. I grab it out of his hands and toss it down the back of my throat, intentionally skipping past the surface of my tongue because it’s too jarring and too real, to actually taste the raw poison I’m shooting into my body.

I don’t laugh because it’s the worst joke I’ve ever heard in my life.

And that’s the last thing I remember.

Refusing to laugh at a shitty joke.

I wake up on the couch the following morning, stiff party dress clinging to my body, painful heels kicked onto my carpet. My mouth and skull feel dry and soulless like they’ve been stuffed with cotton balls. Violet, my best friend and roommate towers above me. She’s wearing tiny white cut-off shorts. Her skin looks like gold, my spirit feels like ash.

“You blacked out last night.” She reports like a newscaster.

“Do you remember getting home?”

I pause for a moment. It’s a pause teeming with possibilities. For instance, I could sit up straight, plaster a smile onto my puffy face and insist I do indeed remember everything and pretend like I TOTALLY know whatever embarrassing thing she’s about to reveal to me that I did. No one can talk up a good story like yours truly. I should have an honorary doctorate from Harvard in Verbal Bullshit.

I could tell her the truth. The whole truth. But the truth is loaded like a gun and I’m not sure I’m ready to pull the trigger. Once the shots are fired, there’s no turning back. The empty lies are dead and the truth is the only thing left breathing.

“I remember everything, but I don’t want to talk about it.” I decide to keep on lying. People undermine the soul-snatching darkness that lives inside each and every lie. Lying is like drugs. It’s a form of self-medication. True, lying might not cause you to fall down drunk in the street causing you to tear your brand new tights and skin your knees and text your ex something insane, but it’s the same shit. Lying, spending money you don’t have, pill-popping, slurping back wine like you’re going to the electric chair, sleeping with people who treat you like garbage, it’s all one giant band-aid. A nice piece of gauze to throw over the gaping wound that’s too grotesque and too painful, and most pressingly, too real, to deal with.

Violet leaves because she has a boyfriend to tend to, and the moment the door slams behind her Shame enters the room. She saddles up next to me on the couch. Our elbows touch. Her skin is ice-cold.

“You’re an embarrassment so you better keep on lying!”

She sing-songs, her smile wicked and wide like the Cheshire Cat. Her presence is so suffocating it sucks all the air out of the room. Shame is like one of those man-spreaders you find on the subways of New York. She sits lazily with legs stretched open wide, taking up all the space, leaving no room for you to take a seat. Her entitled energy makes you feel too uncomfortable and unworthy to ask if she can please move over because you’re exhausted and your feet are killing you, so you just stay quiet and grip onto the subway railing with all your might as the tremble of the train rocks your body back and forth like a rag doll.

But it’s only a matter of time before you fall.

I was falling, I could feel it. The train was flying out of control and not even the silencing power of shame could stop me from letting out a tiny scream.

Later that night I have a panic attack. I’ve had several before, but tonight I am out of Xanax. I am forced to sit in the panic. I’m too scared to leave my apartment to pick up wine. Everything feels electric. Vibrational. Razor-sharp. Too sharp for my eyes to process. Even the texture of the exposed brick in my apartment is starting to freak me out.

I might be a girl running away from all she fears is true about her, I might be abusing the deadliest numbing mechanisms in the stratosphere and I might be a heap of sadness and anxiety haphazardly tossed onto the floor like yesterday’s dirty laundry — but even in this fragile, ever-diminishing state, I know in my heart of hearts that this isn’t me. My recent behavior isn’t reflective of the woman I am.

And this isn’t the life I’m supposed to be living.

I’ve always known since I was a little kid with headgear and glasses that I was supposed to do something big with my life. Something extraordinary! Even in my darkest hour, the path ahead of me has always appeared to be paved with glitter. But the glitter is starting to fade. In fact, I can hardly see the path in front of me at all anymore.  It’s just dark clouds pregnant with doom.

I realize: The sparkle is vanishing away from my future and for the first time, the thought of a sparkle-less life feels much more terrifying than the wrath of shame.

For the sparkle is me. I am losing me.

I’m tired. I’m hungover. I haven’t had a proper meal in days. I am deeply embarrassed. And to top it off, the fucking texture of the goddamn exposed brick in my apartment is taunting me.

I pick up the phone and dial my brother in LA.

“Shit is not okay,” I say the moment he answers the phone. Four menial words release into the air and I instantly see a tiny beam of light bleed through the curtains of my living room. It’s so small but so beautiful, I can’t help but cry.

As I mentioned, Zara is here for a 3 part series, so stay tuned for parts 2 & 3 where she talks about confronting her pain & self-forgiveness.

6 replies to “Self Medicating The Pain”