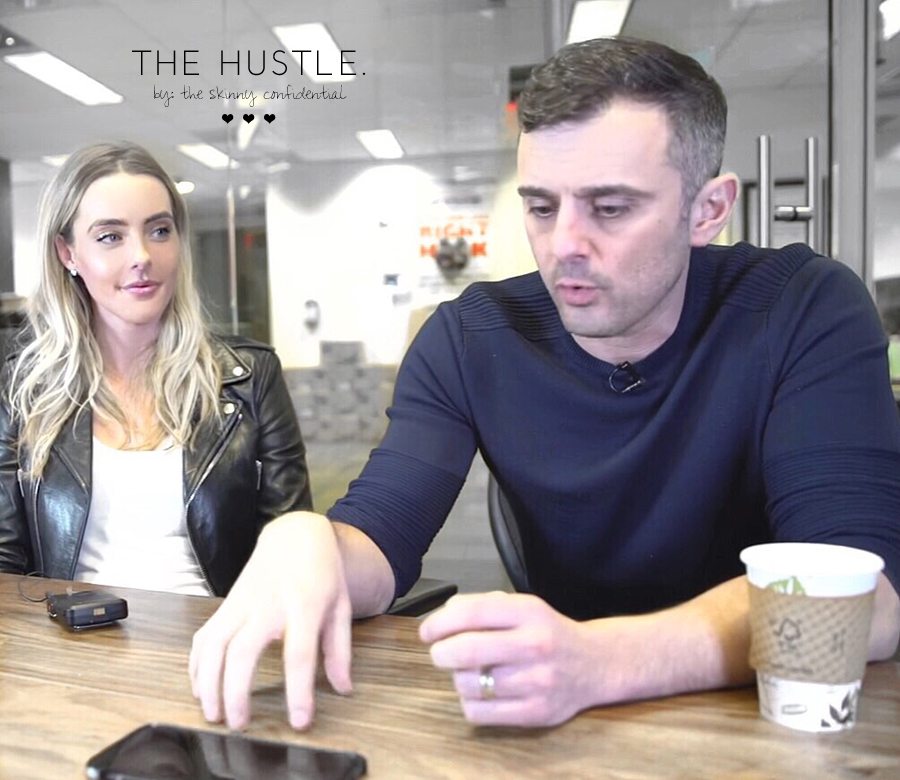 Part of the reason for the New York trip was to be on The Gary Vee Show.

Now, if you know me, you know I LIVE & FUCKING DIE FOR GARY VEE.

He has been such a gnarly influence throughout my blogging career…that it’s kind of ridiculous.

Basically the story here is my dad ( shoutout to Brad, love you Dadzy! ) gave me CRUSH IT!: Why NOW Is the Time to Cash In on Your Passion, as a Christmas gift.

& this my friends, is what started my relationship with Mr. Gary Vee.

If you haven’t read CRUSH IT! & you’re a bossy business babe, come out from the rock you’re hiding under. This isn’t sponsored, this isn’t bullshit, this is the real deal.

And when you read CRUSH IT! you will get it. And you will get me. I literally feel like I could have written the book.

Michael is obsessed too.

Anyway, I started following Gary on all his social platforms & became ACTIVELY interested in everything he was doing.

Not because I want to be like him ( I mean he’s a man & his demo is certainly not my demo ) but because I completely 100% respect every piece of business advice that comes out of the man’s mouth.

So yes, I’m a total super fan of Gary Vee.

People think this is weird maybe because he’s a male but I would go as far to say he’s been sort of an online mentor. He’s helped in every aspect of my business through a computer screen.

So Michael & I read all of Gary’s stuff ( I even did a post on him last year ) & just truly consume everything he says.

My Gary Vee obsession is so real guys. I have listened to all 191 of his shows. I would never dare drive up to LA without Gary’s podcast playing. AND I’m almost done with all his books ( reading this one at the moment, mid-flight ). In fact, when I work on my computer, I even play his YouTube videos to gain business advice.

I’m even going to say I’d leave Michael for him. Sorry babe.

SO WHEN GARY VEE’S TEAM REACHED OUT ASKING IF MICHAEL & I WANTED TO BE ON HIS SHOW????

But seriously I was having rapid heart palpitations.

Gary is to entrepreneurs what Oprah is to celebrities.

This is a life goal. It made every minute of hustle pay off.

SO we went to his company VanyerMedia & met the whole crew. His team is unbelievable. Shoutout to India & DRock. We also shot with YouTuber, Sara Dietschy ( << so sweet! Check her out ). Anyway, Gary’s office is literally goals. It’s a casual 12 stories. And the man HUSTLES HIS ASS OFF.

Ok so we get there & immediately we are taken to his podcast room & he comes in ready to kick some ass. No prep, just threw us on the show. Badass because it’s 100% authentic.

You can view the episode here.

Gary talks about sacrifice a lot.

But sacrifice is very, VERY real.

In fact, it’s so real that it’s like a tumbleweed. It’s typically going on in many different areas.

Nobody wants TO TALK ABOUT SACRIFICE. I want to hit on this for a minute: what have you sacrificed for your hustle?

But it’s all been worth it. Every second. & for the record, my way isn’t the right way. Do what works for you. You know you better than anyone.

Honestly what some people may consider sacrifice, I consider a habit. A habit to focus, buckle down, & hustle. If you want something bad enough you will always find a way.

& with that I’ll leave you with a very appropriate Gary Vee quote:

“The best way to become something is to do something. “

Watch the episode & let me know what you guys think!

+ Also, I did a Snapchat giveaway for 3 of his NEW books & 3 of The Skinny Confidential Books. Winners will be announced tomorrow on Snapchat.

++ & lucky you, I have 2 more copies to give away on TOP of that, simply write why you liked the podcast on the picture of me & Gary on my Instagram & TAG @garyvee. His book(s) will change your life!