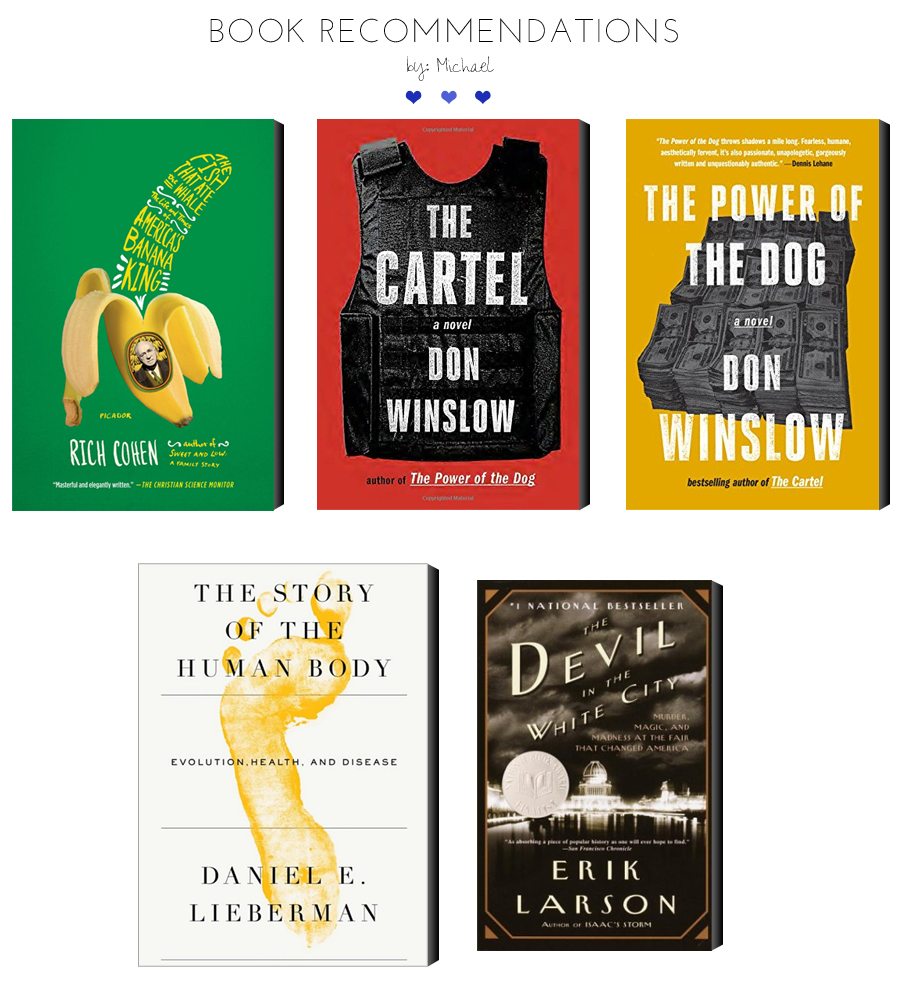 After the response on my last book post and due to popular demand I am going to start writing about my monthly book recs at the end of each month. I think everyone should try and get through at least one book a week so I will give four recommendations each month.

Let me know in the comments what type of books you guys prefer and I can adjust my picks.

Here are my monthly book recommendations for February!

The Fish That Ate the Whale by Rich Cohen

Have you ever heard of the banana king of America? This book is based on the life of Samuel Zemurray, a Russian immigrant who became one of the richest men in the world. He made his fortune on bananas! Along the way he hired on mercenaries, took on the CIA, started revolutions, overturned foreign governments and built one of the biggest fruit companies of his time. It was a really quick and interesting read and I highly recommend it.

The Cartel by Don Winslow

This is the sequel to The Power of the Dog which is the story of the rise of the Barrera brothers and the rise of a drug empire in Mexico. The Cartel follows up the prequel 10 years after the events in the PotD. This book is based around fact and loosely based around the life of Jouquin “El Chapo” Guzman, the notorious Mexican drug kingpin that has been in the news recently. It was really intense and was the most informative book I have read to date on the drug war going on in the U.S. and Mexico. It is a really fast read as well, with a lot of action.

The Story of the Human Body by Daniel Liberman

Recently I have been really intrigued with evolution and psychology. Being in a relationship with Lauryn I hear so many tips and tricks on a regular basis about my diet, what is good, what is bad, what to eat, what not to eat. I wanted to know more about why our bodies react to different food and environments in both positive and negative ways and why they do so. This book literally tells the story of how we evolved over millions of years, shifted to a non-fruit based diet and how cultural changes like farming and the industrial revolution impacted us physically. Using this information, the author hints and even tries to compel his readers to pursue better lifestyles with healthier and happier long term effects.

The Devil in the White City by Erik Larson

This book has been out for a long time now and has gained even more notoriety now that Leo has signed on to play Dr. H. H. Holmes in the upcoming Hollywood movie. I don’t know why I didn’t get on the hype train a while back but I am glad that I recently did. This book is based on true events surrounding the Chicago World’s Fair in 1893. H. H. Holmes was one of America’s first documented serial killers. He claimed to have killed hundreds of women. The book tells the tale of how events at and during the Chicago World’s Fair helped to create a perfect atmosphere for one of America’s first serial killers.

I hope you guys enjoy these book posts & recommendations.

Reading really is the key to success in your life. If you want a sure formula for a miserable life, learn only by your own experiences and never by the experiences of others, both living and dead.