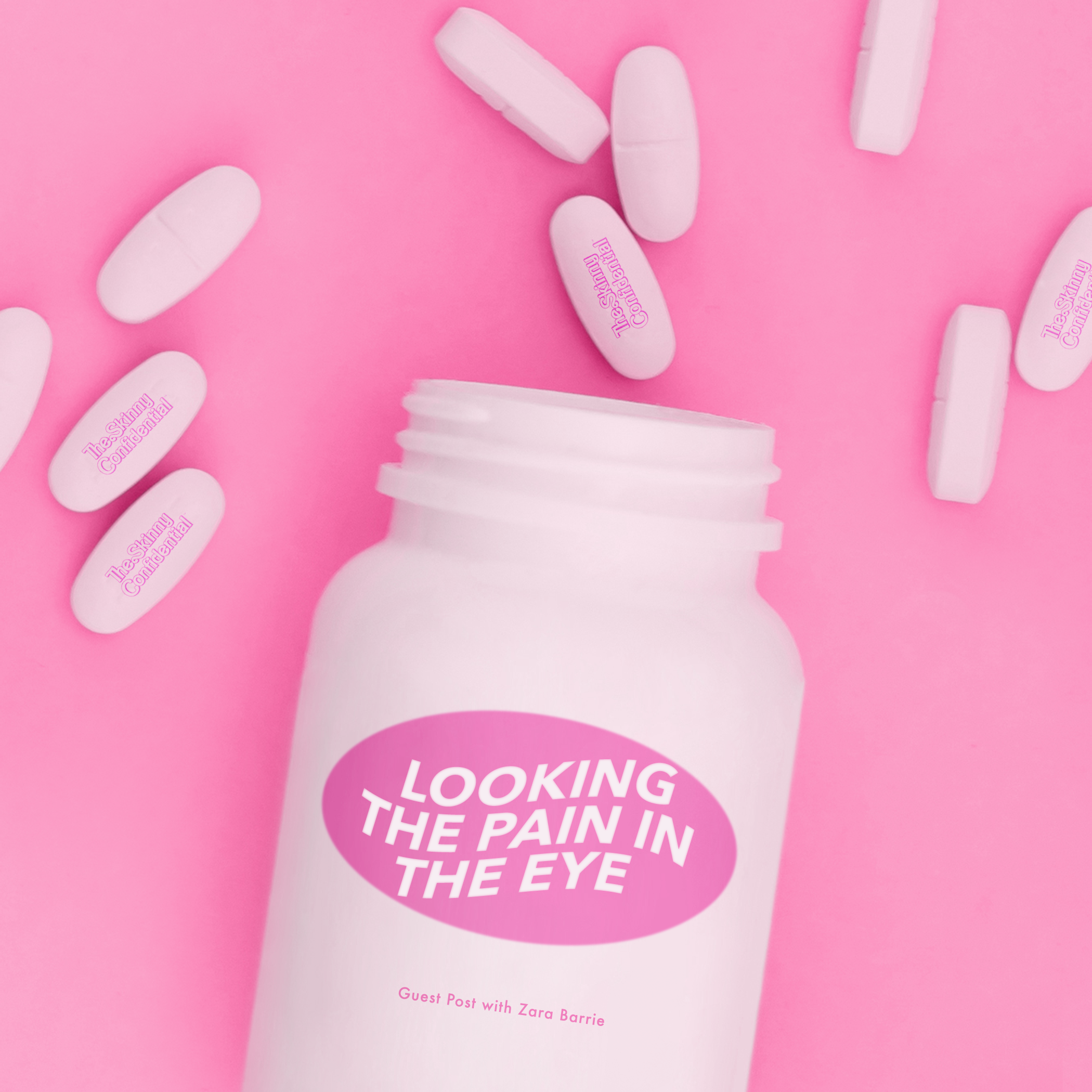 As promised, Zara Barrie is back for a 3 part series share her journey of pain & self-medicating.

If you missed part 1, be sure to check it out here to really get the full picture.

In this post Zara is telling us a what was causing her self-medicating & mechanisms she was using to numb herself. She safely got herself out of this cycle, which she is going to tell us all about right now.

Let’s get into it…

Looking The Pain In The Eye

For so long I was so deeply-afraid, so wildly-embarrassed, so blatantly-convinced if I were to twist my lips around the truth, the wrath of my own shame would murder me.

But I swear to my higher-power (Lana Del Rey) the night I called my brother in Los Angeles and told him that I was incessantly blacking out, unshakably sad, relying on Xanax to quell the anxiety that shot like lightning through my body every single time I let myself be sober and still, and most freakishly, tripped out by the texture of exposed brick in my apartment — the chokehold of shame softened.

Shame’s hands were still wrapped around my neck, but her grip no longer suffocated me.

A couple of days after speaking to my brother, I went to a doctor a family friend in London set me up with. My eyes nearly fell out of their sockets the second I stepped into her office. This was no ordinary doctor. She had giant, gorgeously faux tits that spilled out of a Barbie pink blouse, a mini-skirt that kissed the tops of her (very shiny) faux tanned thighs, and a Texas-style beauty-queen blowout. It felt like a sign from the great divine. This was my kind of girl. See, in London, I’d always felt too-extra, too-emotional, too-loud, too-rhinestone-adorned, an ostentatious Beverly Hills palm tree among prim English Roses. I felt instantly soothed by the shimmery presence of the most glamorous, over-the-top doctor to ever exist. (Lana Del Rey surely sent her to me).

“What’s going on, darling?” She purred.

“I fear I’m going crazy,” I said staring at her legs wondering how she got them so…gleamy.

“Why?” The sexy doctor asked.

“Well um, I’m really, really depressed. And really, really, really anxious. I’m drinking way too much because I’m so depressed and so anxious and so empty and it seems to be the only thing that helps.” I paused. I held my breath. Breathing meant feeling and feeling meant crying and I really didn’t want to go there. I’d been numb for so long that emotional vacancy was my comfort zone. I clenched my fists and tightened the muscles in my shoulders to stop the tears from sneakily crawling toward my ducts.

“What else?” She didn’t seem particularly jarred by anything I’d just said. Her matter-of-fact demeanor made me feel less like a space alien and more like what I was: a girl. A girl going through a rough fucking time, but a girl none-the-less.

I decided to keep going. “Well, I’ve also been developing this texture obsession.”

“Like my brain latches onto strange textures and it makes me feel like my skin is crawling off my body and it stays with me for days, actually I feel like I want to tear off my flesh just talking about it. Wine helps it go away. But I fear I’m going insane.”

“I regret to inform you that you’re not going insane.”

“I’m not?” I asked. I felt like a small child who has just been informed contrary to what her deepest fears have convinced her is true, there are no monsters living beneath her bed.

“No. You have depression and anxiety and chronic intrusive thoughts.”

“It’s a form of obsessive-compulsive disorder. Where one gets unwanted, intrusive thoughts or images stuck inside their heads. It’s a nightmare. But it’s not that uncommon. I have it too.”

She has it too?

“Yes, darling. I have it too.” She cooed, reading my mind. “It runs in my family. It’s a biochemical issue. Not a big deal at all! I’m going to prescribe you a low dose of an antidepressant.”

“Okay,” I said nervously. Funny I was scared to take an antidepressant but had recklessly popped a dirty ecstasy pill into my mouth the weekend prior, without a second thought.

She picked up a bright pink pen and wrote me a prescription. “Try this to get yourself sorted out, but listen, darling. You need to go to therapy. There might be some pain inside of you that you need to confront.”

“Sure.” I chirped. I’d take the antidepressants but therapy was out of the question.

Two weeks later I was sitting on the train, heading to work, when I first felt the sweet rush of serotonin sprinkle itself across my sad brain.

Maybe it’s not all so bad.

I cheerily thought. As I skipped off the train and onto Oxford Street I suddenly felt like it was Christmas in my mind. I felt the dark curtains that had been drawn shut across the windows of my heart had suddenly been pulled open and all this sunlight was pouring inside of me.

I felt like I could see glitter brightening up the path of my future again!

This is it. I don’t have a drinking problem! I don’t have to revisit the trauma of the past! And I don’t need therapy! These magical pills are all I need! THIS. IS. THE. ANSWER.

And it was the answer. At first. And then little-by-little the demons found their way back into my orbit.

It started with nightmares.

Gory, graphic nightmares about being held down by large, scary men. Then my ex-girlfriend shame returned. She taunted me that I would soon be found out by my parents for who I really was. The medication helped me crawl out of bed in the morning, but it was not able to fix what I felt was broken inside of me. It was not able to erase the traumas of the past.

I wish I could tell you that I realized this right away and went to therapy. But I’m one of the most stubborn bitches you’ll ever meet. My lack of willingness to give in is both my greatest strength and my deadliest weakness. I didn’t go to therapy. I didn’t go over to a trusted friend’s house. And I went back to the bar and drank myself into oblivion.

It’s not that I’d been completely sober those first few blissful months on antidepressants, but I hadn’t felt the need to escape through drinking. For the first time in years, I’d been drinking for fun, not to numb.

But the demons were back, so were my blackouts.

Now that I was hopped up on antidepressants, my tolerance was lower than ever before. One large glass of wine made me stumble and slur. Two large glasses of wine and I couldn’t remember a thing the next day. And I was a different kind of drunk than I’d ever been before. The pills mixed with the booze made me wild and reckless. I ate a supermodel’s birthday candle right off of her cake at a trendy party in Notting Hill (that was a special kind of mortifying and still makes me want to hide under the covers for the rest of my life).

I jumped into a shopping cart that was rolling down a busy street at 2 AM and almost busted my face open. And most dangerously, I began to invite strangers to my studio apartment. At this point, my roommate had moved in with her boyfriend so I was free to let my self-destructive flag fly in peace.

One morning I woke up with a heart so heavy I thought it was going to drop out of my chest. I knew something really dark had happened to me the night before. I didn’t need to look at the black and blue bruises that adorned my skinny wrists like matching cuff bracelets to know that someone had hurt me. Someone had done something to me against my will. My spirit felt polluted.

Once again I peered at the sprawling road of my future.

I watched the sparkles that paved the path disappear one by one in front of my eyes. My glittery future looked as flat and matte and murky as it had before I started taking the antidepressants.

I got on a plane and decided to stay at my parent’s house in Florida for a while. I called a therapist. And I was broke as hell but my life was at stake. I knew that. If I didn’t die from overdosing on drinking or drugs, I would die from the situations I put myself in when under the influence. There was no quick-fix. There was no magic pill. I had to rip that pretty pink band-aid off and look at the wound in all its naked gory.

The therapist I went to see, Catherine had warm hazel eyes and a southern twang. She wasn’t glamorous like the London doctor, but she had emitted such radiant energy it was like she was lit from within.

“What’s going on.” She asked. Nag Champa incense burned in the background.

“Why are you so afraid to feel, Zara?” The tenderness that bled through her voice when she said my name out loud made me start to hysterically cry.

“Because these feelings are so scary I think they’ll kill me.”

“No. Feelings are not monsters that will kill you in your sleep. That’s actually not physically possible. Running from them with booze and drugs could kill you. But feelings won’t.”

“Even the really, really bad ones?”

“Even the really, really bad one.”

That was the moment I learned the most powerful lesson I’ve ever learned in my life, one that I repeat to myself every single time I’m tempted to numb an uncomfortable emotion.

Feelings can’t kill you. Running from them can.

Be sure to follow Zara on Instagram @zarabarrie & check out her other 2 posts on The Skinny Confidential ( here & here ).

Stay tuned for part 3 where Zara is going to give us all the tips for self-forgiveness & how she found freedom.

++ how to practice emotional intelligence.

5 replies to “Looking The Pain In The Eye”