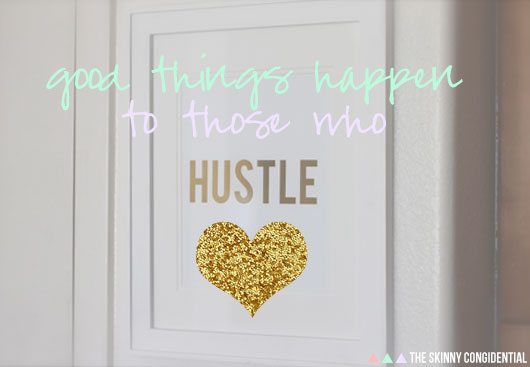 Lemme tell ya: if I’ve had any success, it’s 100% attributed to hustling.

But none are executed without a lil hustle.

As Mr. Abe Lincoln said “things may come to those who wait…but only the things left by those who hustle.”

I know a lot of people don’t want to hear that; they want to hear about destiny ( AKA what’s meant to be will be— ::YAWN:: ), luck, or dreams that magically come true.

Luck is where preparation meets opportunity.

Anyway, the framed picture above hangs right by my door. I look at it ( subconsciously or consciously ) every time I leave my house.

The best reminder ever, right?

& BTW: I’m not preaching to act like some slimmy-ass, loser scam artist. All I’m saying is: execute, hustle, do what ya gotta do to make your dreams come to life.

Art of Mainliness states, “looking at the men that I admire from history, they all have one thing in common: they were hustlers. Theodore Roosevelt accomplished an insane amount of work because he lived the strenuous life, i.e. hustled. Thomas Edison patented thousands of inventions and perfected the light bulb because he spent all day hustling. Frederick Douglass was an orator, diplomat, newspaper editor, and author because he hustled. And pretty much every self-made man has the same story.”

The Skinny Confidential has grown because its been watered.

Day after day. It’s work. Like, the seven-days-a-week-bust-my-ass-kinda work. There’s been no short-cuts. I’ve worked weekends/birthdays/until 4 am, ten million times.

But hey, that’s all part of the hustle. And it’s truthfully worth every second.

A lot of people aren’t up for the nitty-gritty hustle. I sometimes don’t blame them- it’s hard. But if you’re up for it, then hustle your F-ing ass to get what you want.

Because ultimately, it’s up to you. Get outta your comfort zone.

What chu waiting for?