Oh GEEZ, Can We Please Talk About This Annoying-Ass Subject?!
Skip to content 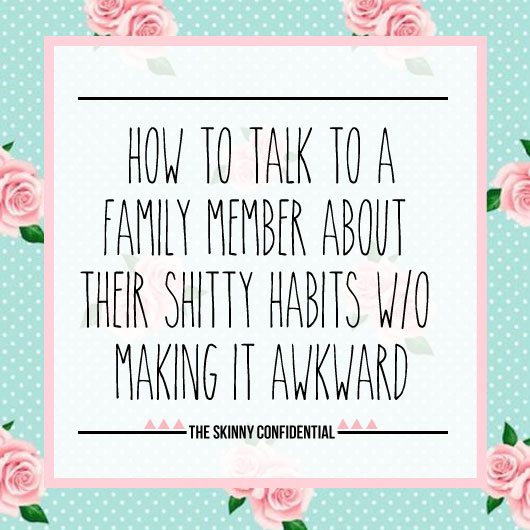 They’re out there & they’re loose.

I did a chapter in my book called ‘Love Chub.’ Essentially the chapter is all about girls who gain weight when they fall madly in love because their BF/husband eat like crap.

Today I’m talking about another real, serious epidemic I can’t stand: OLDER FAMILY MEMBERS WHO ‘THINK’ THEY KNOW HOW TO EAT.

It’s such a buzzkill because they’re totally ignorant/stubborn/closed minded & living in La-La-Land ( can I get a one-way ticket? Must be nice, ehh? ).

I mean, thick, sickie creamer in your coffee was so 1992. EVOLVING is so important!!! So, so important. Buttttt some family members, man, they’re just unwilling to learn about what’s going on in the clean food world.

So here’s my advice on an older family member who still eats Wonder Bread & thinks Oreo cereal is “part of a complete breakfast”:

❤ Have fruit sitting out at all times. Yes. Every second of every day. This will cause them to be tempted by real food as opposed to shitty food.

❤ Talk ( don’t preach ) about your healthy lifestyle. I’m tots guilty of being a totally preacher. I’m so annoying, I annoy myself. But I really do try to just casually talk about healthy living. Keyword: try.

❤ Feed the dog healthier food than they’re eating…in front of them ( & make a total fuss about it ). You better bet your ass Pixy is getting the best of the best when it comes to food ( a healthy dog food post seems to be in my near future? ). She also drinks the best water & has BPA-free bowls. It bugs me when a family member doesn’t take the same healthy initiative as I give my dog. Get with the program, fam bam!!

❤ Bring fresh green juice to their house & make noises that are obnoxious. I love to “OH–AHH–SO DELICIOUS I COULD DIE” in front of anyone who doesn’t like to juice.

❤ Talk about working out in front of them & invite them incessantly. Yes. Be annoying. Get them to sweat. Once they’re start, they’ll hopefully be hooked.

❤ Refuse their food…ok so here’s my biggest tip: do NOT eat their crap because you feel obligated. It’s your body, not anyone else’s. Take care of it!! Create an example by not stuffing dirty crap down your throat. Wanna piss them off? Bring your own delicious, healthy food in Tupperware.

While you’re at it: take a look at a dated food pyramid, it will instill the fact that times aren’t the same as they were back in the day. Things change daily, get on the healthy train, or you’ll be stranded.

Ultimately, I like to compare family members who eat like shit to acrylic nails with a French manicure…

Sigh…thank God my Dad drinks his daily green juice or I might have to force it down his throat.

While smiling, of course.

How do you deal with this little buzzkill?

44 Replies to “Oh GEEZ, Can We Please Talk About This Annoying-Ass Subject?!”