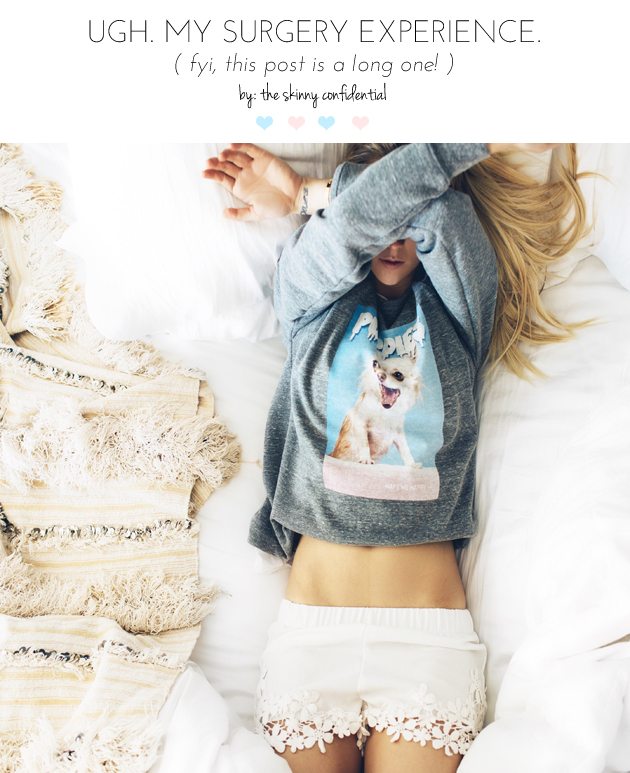 Life has been intense these past 2 weeks.

If you read this post you guys know I had surgery.

Firstly, I’ve had 3 surgical procedures in my life: appendectomy ( my mom thought I had the flu…turned out my appendix ruptured & went gangrene in high school. Hurt like a bitch ), a boob job ( circa 2005. If you guys want a full blog post on this I’m happy to do one— lmk below ), & my wisdom teeth pulled ( but who hasn’t? ).

I feel like although the appendix was tough, nothing was as gnarly as my fourth surgery: jaw corrective surgery. 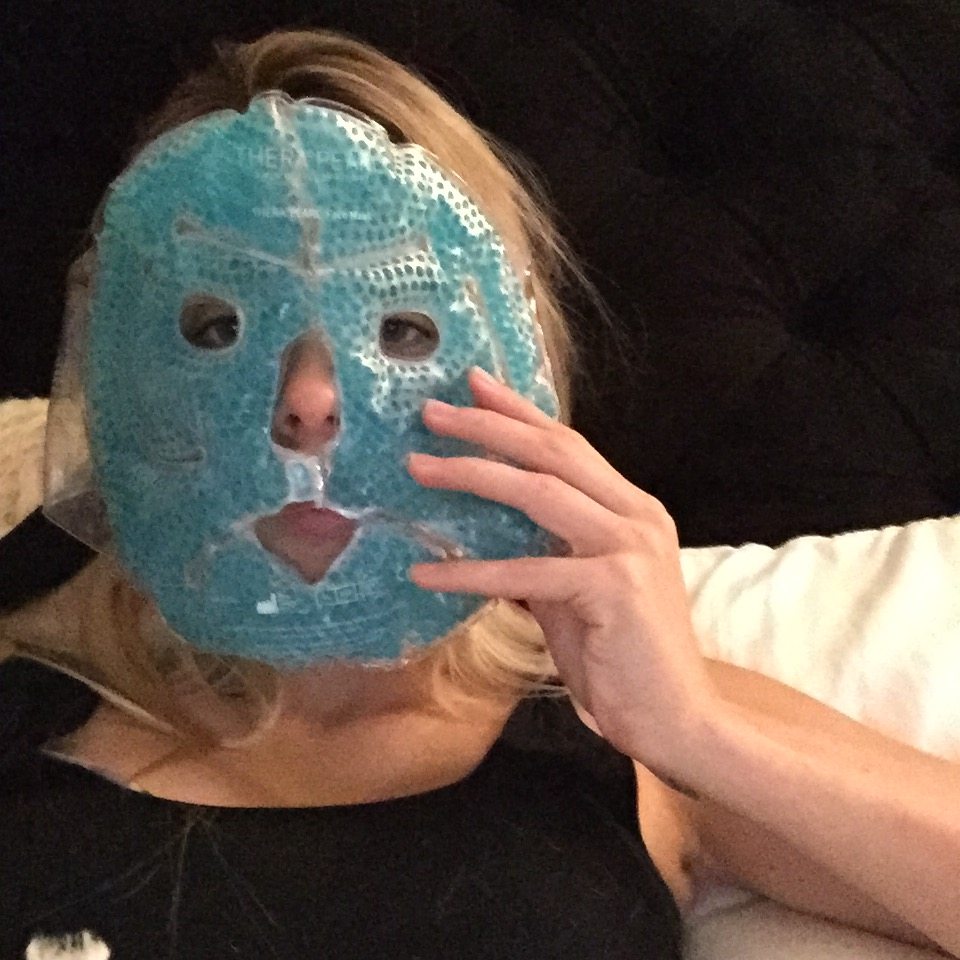 Let me start from the beginning.

Surprisingly I’m a very private person in many ways. When you’re a blogger you sort of get to choose what you want to share & what’s off limits. As my blog years have gone on though, I’ve become a bit more open ( maybe that’s age too? ). Anyway the reason I decided to share my surgery experience is because maybe, hopefully it will help someone out there who’s going through something similar. In fact, if you guys are interested, I’ll film a full video on the subject.

…And for some of you guys? I’m sure this post will be boring as hell & you’re like ‘uh, can we talk about detox drinks or sleep buns?’ This post definitely isn’t my most exciting post, lol.

When I was thirteen-ish years old the dentist told me I had an INTENSE overbite, my teeth were crooked, & my bite was off and I’d eventually need jaw corrective surgery to align everything.

And whelp, I was in my teens. AKA too busy with butterfly Frankie B’s, conference calling my friends, & boys ( Michael actually, since we met when we were 12 ) & just brushed the dentist’s warning off.

A year later I got those nasty clear braces with rubber bands like everyone else in 7th grade & went about middle school.

High school came, I finally got the now yellow braces off but my jaw always bothered me. Not too bad, but a gnawing tenderness that made my jaw click when I opened it. Also it never opened too wide.

I tried banning gum ( cinnamon Trident specially ) because it made the jaw clicking worse.

After high school I was involved in an AWFUL car accident. My neck was fucked from then on. Lateral whiplash BIG TIME. The accident affected my jaw & neck, adding more pain to the whole situation.

Back up— then there was the grinding.

I’ve grinded my teeth, like a lot of people, since I can remember. But not like grinding, sort of, a little…LIKE GRINDING where I wake people up. Accompanied with snoring. And the snoring has been described to me as sounding like ‘a dying wildebeest.’ It’s not like a cute, girly snore. It’s actually dreadful. Oh & hard plastic night guards? Tried ’em. I’ve grinded THROUGH about 10 of those $500 suckers. Michael will tell anyone that listens that he’s never heard someone so aggressive in their sleep. It goes something like this HUGE SNORE, grind, clap my teeth together, BIGGER SNORE, full on mouth hanging open. Chic.

If you really think about it, sleep is supposed to be restful so instead of feeling rested, I would wake up more fatigued than when I went to bed. Every day. Also, I firmly believe that half of my anxiety comes from jaw clenching. But more on that in a second.

Anyway when my first semester at SDSU began my jaw was REALLY ANNOYING. Full on TMJ, grinding, neck pain ( accompanied by cracking my neck 40 times a day for relief ), snoring ( my poor fiancé ), I only could chew on one side of my mouth…& of course, my anxiety was worse than ever.

One day I went to a new dentist to get bleach trays. Right when he saw me he said “you’re a candidate for jaw corrective surgery.”

I was working 3 jobs, broke as a joke, & distracted by college, home life, & keeping my head afloat.

He suggested I go see a jaw surgeon specialist, so I did. The surgeon told me the same thing: “you will find so much relief with this surgery. The overall process is intense but totally worth it in the end.”

Unfortunately, I didn’t have health insurance ( careless, young, & immature, right? ). So no cigar there.

I ended up trying resistance stretching ( which helped A LOT ), medical massage, chiropractor,  yoga, the works. Nothing took the jaw pain away.

Two years went by & basically I was uncomfortable every day of my life. So much so that I began to get used to jaw uncomfortable-ness & accept the whole situation.

Then about a year ago, I went to my NEW, NEW dentist ( WHO I’M OBSESSED WITH, IF YOU FOLLOW ME ON SNAPCHAT YOU KNOW ( un: laurynevarts) ) and he took X-rays.

AND DUH…shocker, same outcome. He said I was a candidate for jaw corrective surgery. He explained that my bite was severely off, my teeth had micro cracks all over them, & without the surgery my teeth would slowly deteriorate from the aggressive grinding.

Finally I started to come around to the idea.

I now had health insurance ( they helped cover the surgery ), I’m in a position to support myself financially, & I work from home…so why not fix the problem? Instead of sweep it under the rug, I decided to face it head on.

( Side: at this point my grinding was SO bad, Michael would have to wake me up for me to stop. And if I drank a glass of wine or two? It was TWENTY times worse. My anxiety was worse too. It’s kind of like this: clench your jaw right now. Hold it for a minute. This is how I felt EVERY WAKING second. My jaw was clenched, every minute of every day, even when I was sleeping. The anxiety coming from clenching my jaw was ridiculous. The morning fatigue was getting old too. I WAS FED UP ).

My amazing dentist ( shoutout to Dr. Kiyan at FLOSS in La Jolla ) told me to see a doctor who specializes in jaw corrective surgery.

So I saw the doctor, liked him immediately, got 2 more opinions just to be sure, but settled on the talented Dr. McGann & his amazing team. The doctor measured how off my jaw was…TWO CENTIMETERS. This is A LOT. On a scale of 1 to 10, it’s about a 7.5 severity. Instead of my teeth fitting together, they went on top of each other. What a f-ing mess.

The surgery itself required a lot of prep work. I had to have braces on my teeth for the past year to prep me for June 16th’s surgery.

The day before the procedure I had to get the braces removed & get REAL, FULL ON METAL 7TH GRADE BRACES…hahaha. If that’s not a throwback I don’t know what is? I heard in Europe braces are all the rage & considered cool, is this true?

Ok so, I went into surgery SCARED. Scared not for surgery but scared because I hate IV needles ( hahaha, what a weirdo ). In surgery, they broke my upper & lower jaw & moved them in the proper place and put my teeth in alignment. The surgery took 7 hours. The doctor made all incisions in my mouth so you can’t see them & put the jaw back together with screws and plates. Fun times, fun times.

Afterwards, I woke up DRUGGED UP to my parents & Michael, VERY SWOLLEN. Let’s just say I looked ( & still look ) like Sloth from The Goonies: 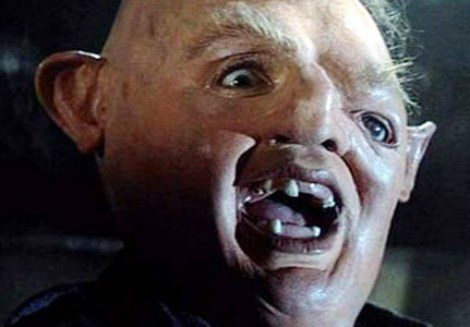 Michael stayed the night in the hospital & had to feed me orange/carrot/turmeric juice through a syringe…like a baby bird. He was super sweet & the whole process just made me realize how much I love him. He’s a keeper, I guess ; ).

The second day, looking like Sponge Bob Square Pants, literally though, it was time to check out of the hospital.

I went to my God parent’s house to recover. Their house is very mellow, with a calming fountain, perfect breeze, essential oil diffusers, & my chihuahuas love them so it’s a great place to lay low during a recovery.

And quite honestly, the first week was hell.

Veryyyy uncomfortable. Basically the second day I fainted & my eyes rolled back in my head, which I won’t get in to that whole story but it was BAD. The whole week was just annoying.

Each day gets a little better but when you do bone surgery, it’s GNARLY. The whole ordeal has tested my patience, discipline, & mind— BIG TIME.

& poor Michael…here’s us coming home from the hospital: 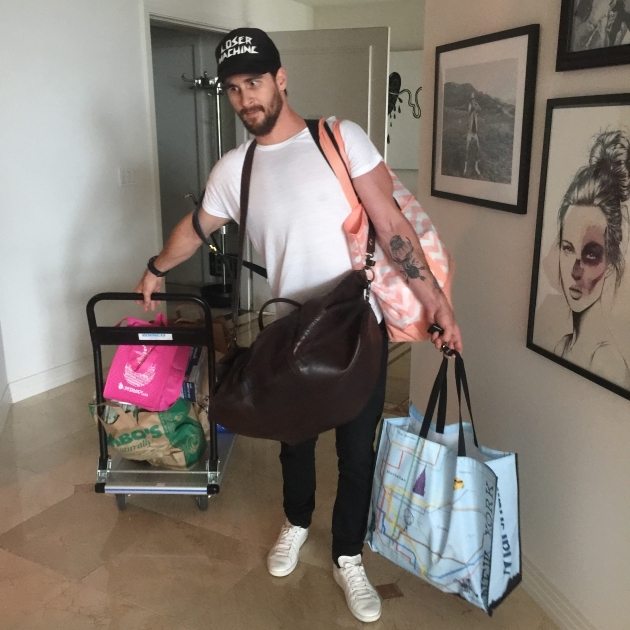 I can only eat very, very soft/liquid foods like mashed sweet potato, bone broth, or Cream of Wheat because I have rubber bands banding my hottie metal braces together. My mouth only opens a tiny bit. I actually had an In & Out burger finely chopped the other day because my body was craving meat…I always listen to my body. It was so, so damn good. Ultimately it sucks though because I’m literally SO hungry. We’ve been juicing up a storm & incorporating a lot of smoothies & vitamins into my daily regime but I’m still always hungry. I can’t stop losing weight, which sounds fun for a week, but it’s not because for the time being I’m anemic & over it.

But here’s the cool thing: my bite closes in the right place for once in my life. YES. My jaw isn’t clicking. I haven’t snored or grinded my teeth since the surgery ( it’s been two weeks ) and I feel…balanced. My posture feels straighter too. It’s difficult to explain to someone who’s never had jaw problems but this will truly change my life.

My anxiety has dissipated. Some still lingers but the anxiousness I carried in my neck has gone away. It’s kind of amazing. I do feel slightly depressed sometimes because coming off anesthesia makes you feel that way sometimes. The extra downtime makes me feel low sometimes too because I’m such a go, go, go person. 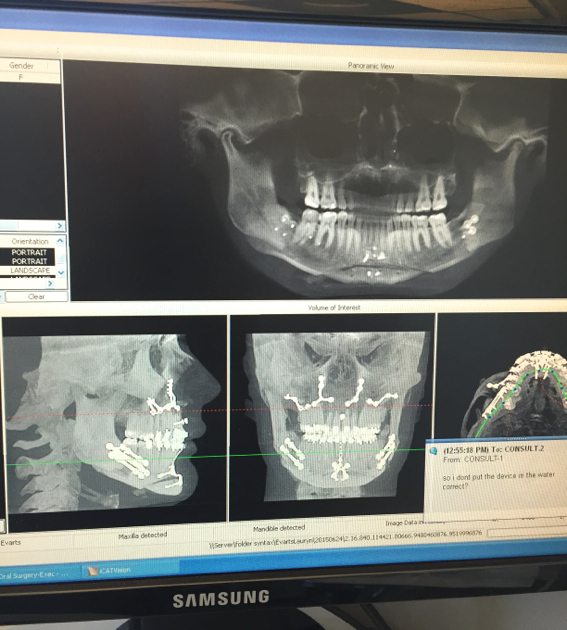 At this point, I’m still in bed pretty much the whole day & very weak. I had a lymphatic massage on my neck yesterday & it felt so good I could have exploded. I also tried doing arms from TSC Bombshell Body Guide but had to stop after ten minutes. Walking the dogs every day is about all I can manage, really. My face is still SOOOO SWOLLEN & half of it is completely numb, I’m sleeping little to none & straight up ( no lying down, ugh ), have more pimples than I’ve ever had in life ( toxins coming through my skin like crazy ), & I’m very uncomfortable— all to be expected after this specific procedure.

Surprisingly though, I was able to post this but it took a few days to write it because I’m so weak. They say I will feel better in 8 weeks…& thank God, the metal braces come off in a month because I look like a 5th grader. I’ll keep you guys updated along the way.

Wanted to mention: another reason I’m telling this story is because life is not always rainbows & that’s ok. This is a storm for me right now. I’ll weather it & come out stronger. This has been really traumatic experience but sometimes shit has to get worse before it becomes better. If you’re in the midst of one of life’s storms, remember: time is a powerful thing. Time is healing & the only thing you can rely on in life is change. So stay strong & MIND OVER MATTER.

If you guys have any questions about the jaw corrective surgery, e-mail me or leave them below! Follow up to come. By the way, so far ( even though it’s been a bitch of recovery ) I haven’t regretted anything for a second. Thanks to my amazing friends & family who have checked in on me everyday & to all you guys— your e-mails, snaps, tweets & Instagrams make me smile!

Ok, I’m off to ice my face with my JAW BRA & watch a marathon of Seinfeld.

From bed, with love, lauryn xx 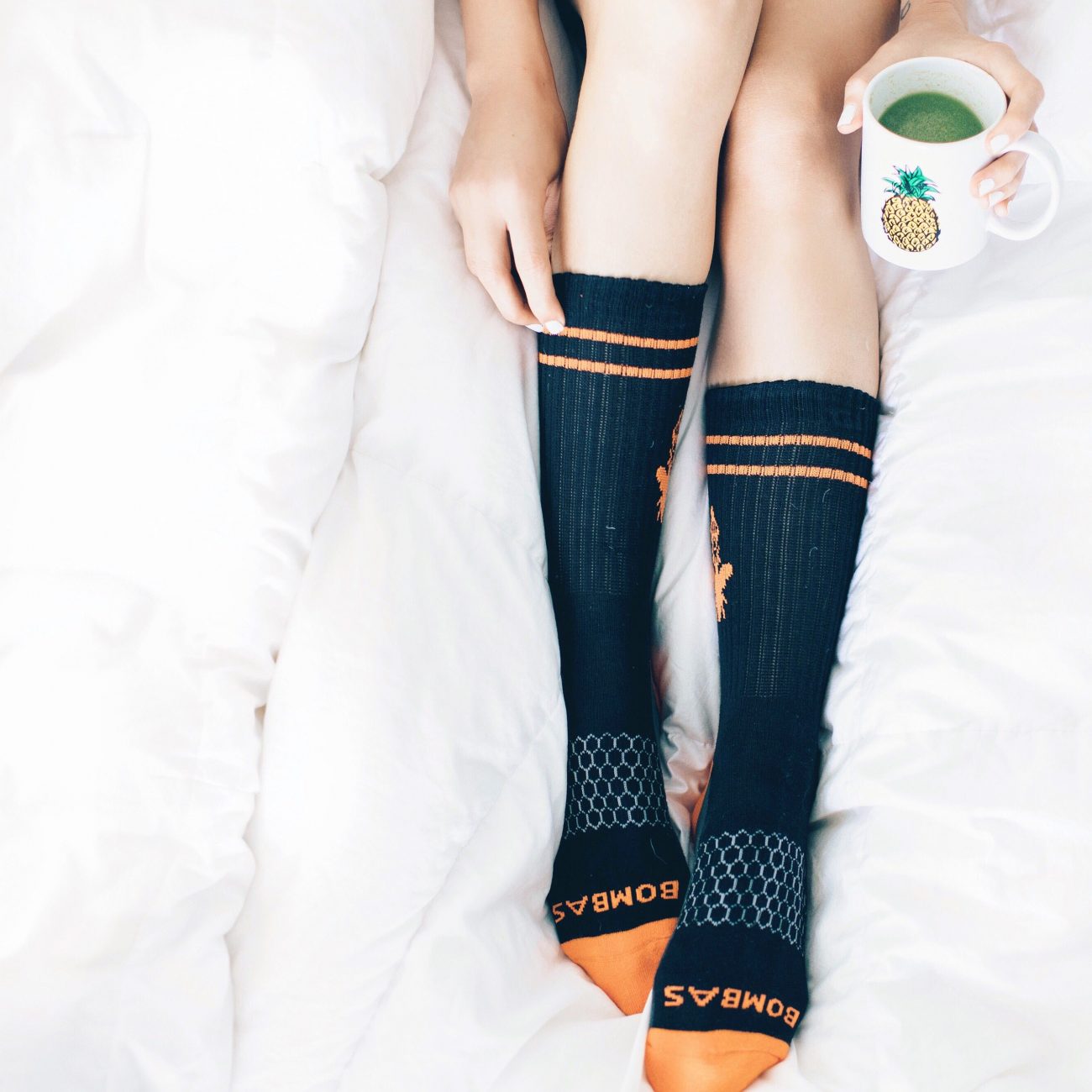 { in bed with green juice } 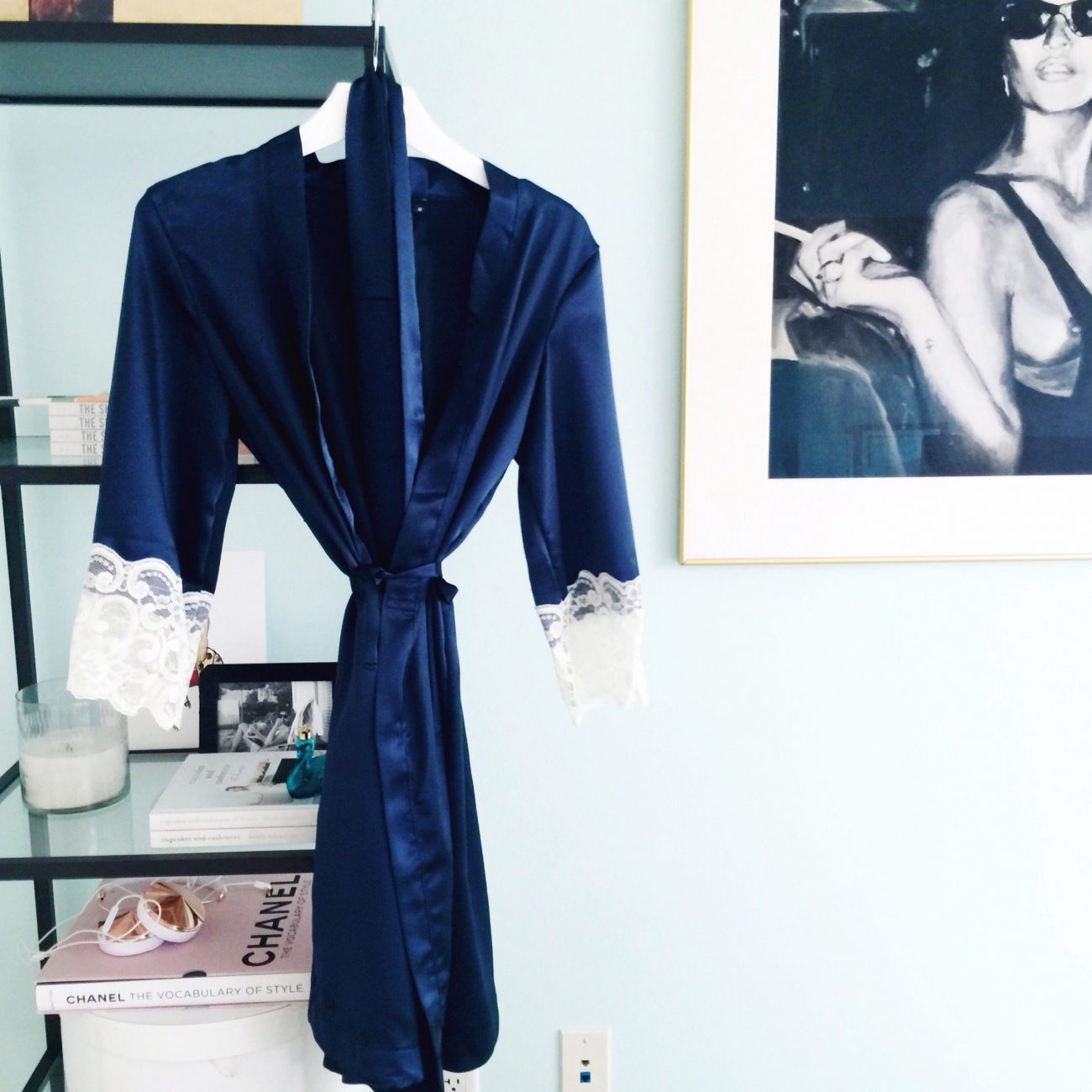