Life of An Entrepreneur: The Good, The Bad, & The Nasty
Skip to content 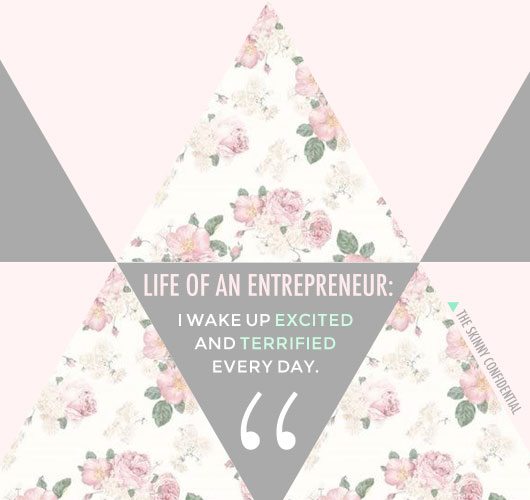 A lot of you guys have e-mail me asking about career advice.

And the truth is I have absolutely no advice when it comes to 9 to 5.

Not that I’m against it.

Actually, I have a deep respect for anyone who works a 9 to 5.

The reason I have no advice is because I’ve never worked 9 to 5.

Ever since I was little it was almost ingrained in me.

I grew in a cul-de-sac neighborhood where there were like, one million Girl Scouts. They all went around door to door and sold cookies for Troop #110.

& I’m being dead honest here: I never got it. Like, my brain just does not understand the concept- at all.

Why would I spend my time/effort selling cookies for someone else to make money? Sure, sure, there’s prizes ( yawn ). But seriously, why would I work my ten year old butt off to make the Girl Scout Organization money? Hmm…totes wasn’t interested in the badges either. Basically I wanted to start my own separate organization where I could be the creative one.

Anyway a light bulb went off: I decided to set up my own business at the end of the street. I sold handmade embroidered tiny handkerchiefs made by yours truly. I borrowed $50 bucks for start up costs from my sweet parents & paid them back through chores ( kinda like an allowance on loan- ha! ). All the parents in the neighborhood supported my biz & I pocketed the money. Win/win.

& hey, BTW: I not making this shit up. I mean, an embroidery business? Yes, this is real life.

In the summertime, I switched the biz up to a lemonade stand because ya gotta roll with the seasons. LOL.

So things spiraled from there & I went on to work, work, work. All through high school I hostessed, worked in retail, picked up random catering jobs, modeled, & basically hustled my ass off to do WTF-ever to make my own money.

My goal: I wanted a brand new Lexus in high school and so I made it happen because that’s how I was raised.

To just make it happen.

Again though, none of these jobs were 9 to 5. They were weird hours. All of them.

Oddly enough, for a long, long time I thought I was lazy…& was super worried about it. My friend’s in high school would talk about becoming the CEO of huge companies & I was bored/confused/feeling like Lazy Larry.

Come to find out…( total ‘aha!!’ moment ) I wasn’t at all lazy, I just didn’t have any interest in working towards someone else’s dream. Furthermore I’ve always had my own specific, OCD way of doing things. I want to be a CEO but of my own baby.

Pretty much I’m not a fan of being told what to do.

Me, 24/7: “oh you want me to fold that shirt next to the other shirts?? That’s nice…but I think it looks way cooler on the mannequin.”

FYI: you can read my post-high school career story here & here ( << this were I found my calling/passions ).

Oh! Also! It certainly helped that both of my parents were entrepreneurs.

Ok so all this sounds totally great right? 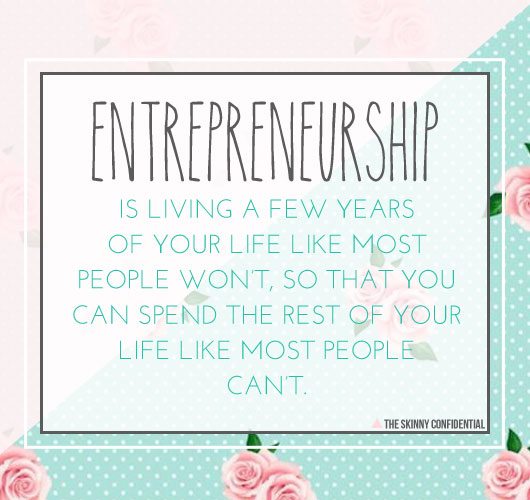 I’m going to get real & share the good, the bad, & the nasty about being an entrepreneur:

○ You make your own hours— this can be difficult because of life’s distraction.
○ You constantly have to practice discipline. Like, constantly.
○ The money goes up…& it goes down. You gotta ride the waves. Sometimes it’s great, sometimes it sucks.
○ Working from home isn’t always rainbows & butterflies. You can get caught up in laundry/cleaning/distractions & occasionally there’s a real laziness where you’ll wear those flannel PJ’s way too long…
○ Feeling uninspired blows— sometimes it’s difficult to keep yourself inspired on the reg.

○ You make your own hours: double edge sword x 10. It’s harder than it sounds.
○ Seven days a week, 24/7, you’re working. My brain literally doesn’t shut off- I make notes in the middle of the night…let’s just say there’s no clocking out.
○ There’s no salary with benefits; money can be inconsistent & at times, scary.
○ Family members/relationships can suffer because you’re never really shut off. For instance, I’m working like a psycho in bed at 11 PM right now while Michael is trying to watch “Lilyhammer” #annoying.
○ If you miss a day, you can’t blame anyone but yourself.
○ It’s damn scary. ESP when you’re starting out. I worked two jobs while building TSC. One at night & one during the day…it was gnarly. I thank my lucky stars everyday that that chapter is long gone.

Did I miss anything?!

Whatever your ‘work’ is, own it, rock it: & be the best version of yourself!!

95 replies to “Life of An Entrepreneur: The Good, The Bad, & The Nasty”