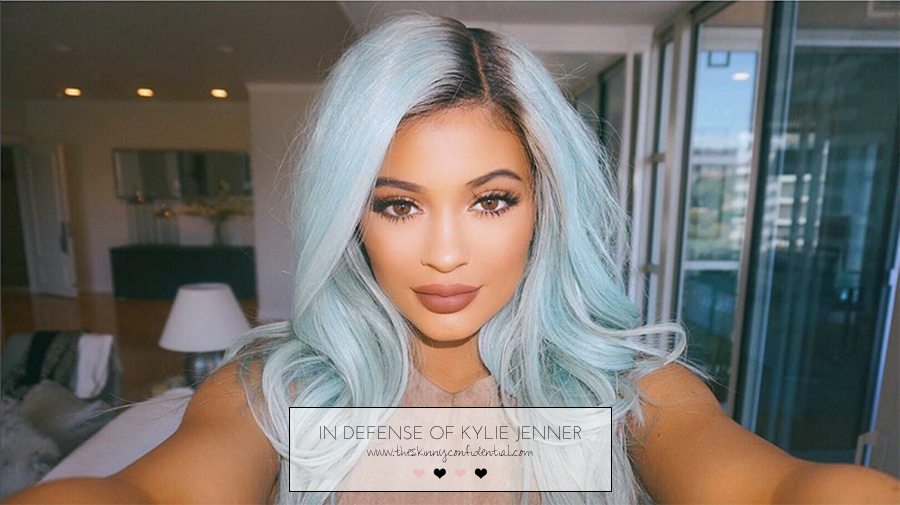 Been meaning to write this post for a year.

…But sometimes it takes a year to wrap my head around things.

That’s just how I am. I take a hot minute to really think, absorb, OBSESS over what I’m going to write about. If I’m pushed in the wrong ways, I rebel. I can’t help it. Currently working on it, trust me.

Ok so YES, clearly this post absolutely has to do with Kylie Jenner.

BECAUSE something is going on that’s HIGHLY ANNOYING.

IT’S SO ANNOYING AND IT’S RIDICULOUS.

I don’t care if I’m the only person on the planet with this opinion. That’s the good thing about blogging, it’s JUST an opinion. It doesn’t hurt anyone. Regardless, I’m just bursting with opinion on this subject & really can’t keep my mouth shut ( weird ).

So what am I defending Kylie on?

Here’s why I’m annoyed: I log on to Facebook & see SO MANY DAMN PEOPLE complaining about the Kardashians/Jenners. Specifically though, Kylie. They complain about her lips, her hips, her boyfriend, her dogs, her makeup, her outfits, her Snapchats, her car, her house, her wigs, her Instagrams, it goes on and on – you get it. ZZZZZzzzzz.

But here’s why I’M VERY ANNOYED. And I’m going to defend Kylie here BIG TIME. You’re watching. Maybe not YOU. But the people complaining are watching.

YES, that’s right, THEY ARE WATCHING.

And people are mad she’s making 100K an Instagram………………. but they’re still following her?

Riddle me this: do you know how much money was spent on Super Bowl commercials in 2000? ANSWER: a shitload.

Just to put it in perspective.

Do you know why?

The rate of the market goes where consumer attention goes.

Where the consumer attention goes, the brands will follow.

So is it a fucking a surprise that Kylie Jenner is getting paid $100,000 an Instagram? No. NO not at all actually. Essentially she’s a like a daily Super Bowl commercial. Tons of eyes watching her. DAILY. Consuming everything she’s doing, saying, wearing. If I was Coca-Cola, I’d want Kylie sipping me on social media too.

Let’s go further though: when is the last time YOU, YES YOU, watched a commercial?

REALLY THINK ABOUT THIS QUESTION.

Consumers are interested in social media in 2016. It’s where the eyeballs are at. Any brand in their right mind is following the eyeballs.

To be really honest with you, I believe that TV today is like radio in the 60’s… it’s on its way out.

A reality which WE’VE cultivated.

And we’ve cultivated the massive attention on Kylie Jenner.

In fact, if you had 100 million eyeballs on you, wouldn’t you do everything to monetize in the smartest way possible?

Let that sink in.

Kylie Jenner is a business woman.

Get comfortable with the fact that Kylie is in fact creating a new way of doing business. This is what the people want. She’s giving it to them. It’s not an accident that she has 50 MILLION Snapchat followers or 63 MILLLION INSTAGRAM followers.

Face it: this is the time we are living in.

Embrace it – or don’t – but this is what’s going on in the world.

My advice is: evolve.

Evolve with what the consumer wants. The consumer is over commercials. They want raw, real, authentic, real-time content. People are over the untouchable TV commercial and overly saturated & boring advertising, in my opinion. Evolution is especially important if you’re running a business. Staying too much in your comfort zone is dangerous. EVOLVE WITH THE TIMES!

It’s very frustrating signing on to social media to see everyone bashing people like Kylie Jenner.

She’s simply giving the audience of 100 million what they’ve cultivated.

So ya, screw you, Super Bowl. Kylie’s where it’s at.

P.S. her lip kit is GENIUS, in my opinion. GENIUS. DOES ANYONE have it?

59 replies to “In Defense Of Kylie Jenner”