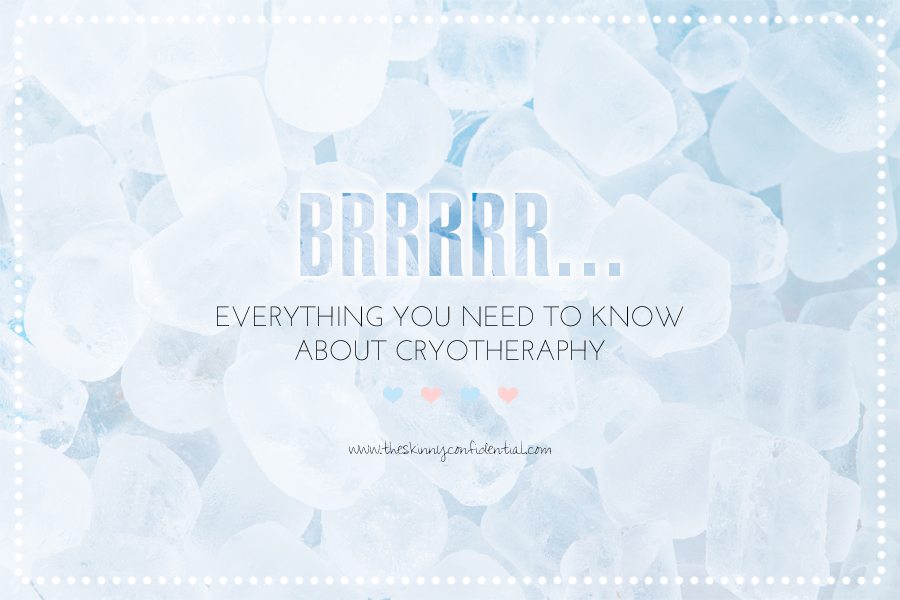 If you follow along on Snapchat you know I’m cryo-SESSED. That’s right, cryotherapy has become a 1, 2, sometimes 3 times a week thing. & it takes 3 minutes so it’s really right up my alley…because WELL, I’m always running around.

Firstly, cryotherapy is AMAZING for collagen production. YOU KNOW how I loveeee my collagen. & ALSO it helps fight any inflammation. Inflammation is the devil guys. It’s dreadful in basically any situation. & cryotherapy helps fight it SOOOO…yes please.

Plus I swear to God, it pumps my skin & clears it up. It’s weird almost.

Quick backstory for you: I’ve got two things going on:

1.) Jaw surgery recovery. Yup, still swollen. Don’t believe me? Trust me. I can assure you my face is STILL SWOLLEN. Especially around the chin/jaw line area. Even under my eyes still. I swell up like Violet Beauregard ( remember though? She swells up like a huge round blueberry balloon in Charlie and the Chocolate Factory ). This happens typically after traveling, tequila, &/or in snowy OR humid weather. After going to cryotherapy I notice the swelling in my face goes down DRAMATICALLY. Literally the second I get off the plane, I run to get some cryo. It helps A LOT.

The other thing that REALLY helped with my swollen face was ice rolling. All the ice rollers on the market squeaked, didn’t hold the cold for very long & to be honest, were kinda ugly. It’s the main reason that I created THE SKINNY CONFIDENTIAL HOT MESS ICE ROLLER. It’s pink, it’s cute, it’s sturdy & keeps the cold for SO LONG, guys. This is the one you wanna get.

2.) A rash. I haven’t gotten into the whole rash thing. But for the sake of this post, I will. For the past 3 months I’ve been fighting a leg rash. A HORRID LEG RASH. The doctor has said it’s from stress ( my stress comes from a lot of different dynamics ). SO I actually have not been able to take a hot shower or go in the jacuzzi for months because the heat makes the ‘stress’ rash worse. Cryotherapy HELPS SO MUCH. Seriously, the rash calms the F down with cold. If anyone has any rash issues, try cryo. Trust me. ( Side note: I’m going to an allergist AND dermatologist separately tomorrow. If any of you have any more rash remedies, PLEASEEEEEEEE share ).

OH & DID I MENTION YOU GET HIGH?

Ya, it’s like a runner’s high x 10. I am super sensitive so I really, REALLY experience the high-y feeling. It’s kind of orgasmic-ish, actually.

You should know that I’m feeling very Yolanda with this post. She treated her Lyme with cryotherapy & raved about it on Housewives. So basically we’re kind of the same because we also both love lemons.

With that, let me introduce you to cryotherapy expert, Matthew Bergman.

Matt knows his shit, ok? Especially about cryotherapy. He also happens to own a cryotherapy treatment center in Hillcrest, CA. called Chiltonic ( you can find me freezing my ass off in the back A LOT ). Anyway he let me pick his brain BIG TIME. Ok, everything you need to know about cryotherapy:

+ Tell us ALL about cryotherapy— explain the ins and outs.

Matthew Bergman: cryotherapy was developed in 1978 in Japan for rheumatoid arthritis. They found that it was effective for many autoimmune diseases such as fibromyalgia, MS, as well as others that present with inflammation. From there the treatment migrated to Europe where it was used by elite and Olympic athletes as a recovery modality.

It really gained a lot of traction here in the U.S.A. when Mark Cuban bought the first batch of machines for the Dallas Mavericks. In 2011 they won the championship. It was the first year they started using cryotherapy and at that time the Mavericks were the only team to have ever done so.

The correlation between cryotherapy and winning was now headline news.

MB: The process takes 3 minutes. What we do is have you enter the changing room first & get you down to as little as you are comfortable wearing.

Women can go nude but men must wear underwear.

We provide you with socks & dive booties as well as gloves to protect your extremities. We want you to be free of moisture, so we provide towels to wipe away the excess and you need to remove jewelry from the neck down. You will then come out of the changing room & we will get you into the chamber where you can remove the robe or towel. We adjust the height so that your head is always outside and we have developed a special collar that further separates you from the nitrogen below. We’ll start the session and the chamber will fill with liquid nitrogen.

Nitrogen is about 87% of the air we breathe, & is very dry in its vapor form.

What that does is triggers your skin, as your largest organ, to send signals to the brain which create massive vasoconstriction. This draws all of the blood away from your extremities into your core to protect the vital organs. While the blood is there circulating in a smaller loop it becomes highly oxygenated, then the immune system kicks in and reduces proteins that cause inflammation and enhances those that reduce it. So you get a net anti-inflammatory benefit from the blood stream itself. It’s much different from an ice bath or an ice pack, which is working from the outside in. This works from the inside out.

Now we’re getting the chamber temperature down to around -165° Fahrenheit. But because this is dry, you only have the cold permeate the skin approximately a half of a milliliter. We want you to shiver, that is what we call shivering thermogenesis. This is what spikes up the metabolism. And for the last 30 seconds, we want you to feel like you want to get the hell out! This activates the fight-or-flight response which is responsible for the endorphin release – that runners high feeling.

You’re never left unattended, we are chatting with you the whole time to distract you from what would otherwise be an unsettling experience. When your 3 minutes is over you immediately start to warm up. We want to see a 30° temperature drop of the skin to know that all of the beneficial effects are taking place. You’ll feel a warmth radiating outward from your core as the blood vessels increase in size flooding that oxygenated, nutrient-rich, anti-inflammatory blood throughout the body. 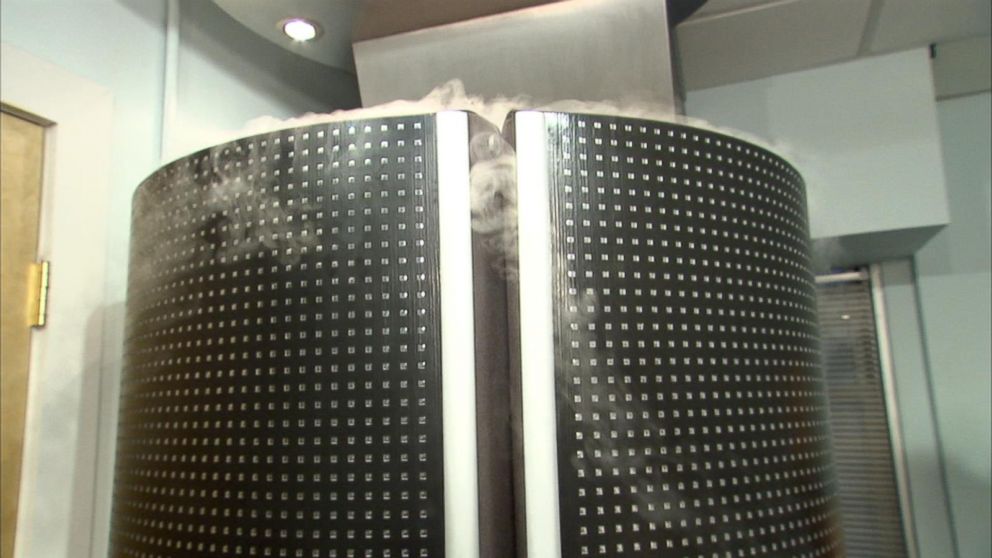 + Since we’re going to be freezing our asses off, we gotta know: what are the benefits?

MB: A myriad! Because of the movement of blood, & the anti-inflammatory response, clients see reduction in pain levels almost immediately. By getting oxygen rich blood to the muscles, it increases flexibility and mobility, and flushes lactic acid which can greatly reduce delayed onset muscle soreness ( DOMS ) after a workout.

Moreover, because of the spike in metabolism you can be burning additional calories for several hours following the treatment and therefore lose weight as well.

MB: Sure, with anything extreme there are risk factors involved. A team of doctors developed our medical readiness form so that anyone with certain cardiac or vascular issues would be precluded from using the therapy. Beyond that, we at Chiltonic have developed a number of additional safety protocols to ensure the safest & best cryotherapy experience possible.

Of course one might say another downside could be addiction! Many of our members come daily and don’t feel the day’s complete without their daily chill.

+ Ok, so why should someone try cryotherapy?

MB: A couple of years ago I wouldn’t have thought that I would have ever tried it. I was pretty skeptical of all things new age.

You see, my wife Gretchen had suffered from chronic back pain due to 2 degenerative discs. She had a horrible time dealing with the pain — she’s allergic to ibuprofen ( NSIDs ) & any of the narcotics make her sick — she just had to grit her teeth and suffer through the pain. She tried everything: massage, chiropractic, and acupuncture — anything that she could. It took 7+ years to be at 75% & cryotherapy is the only thing that has been able to get her past that plateau and to a point now where she no longer says she has chronic back pain.

It was about 6 months prior to being introduced to cryotherapy that I became open to the idea at all. I was suffering from some shoulder pain; I was a professional BMX extreme sports athlete for 15 years and old injuries sometimes come back to haunt me. Gretchen recommended I try acupuncture. I could not have been more skeptical — I tried it and sure enough was completely pain-free afterwards. That experience really opened me up to trying new non-western treatments — a whole world I never knew. So, when I had the opportunity to try cryotherapy I was more open to it than I would have been without that acupuncture experience.

I think that anyone who wants to experience any of the numerous benefits cryotherapy can offer should try it. We’ve had 15 year-old student athletes all the way to 80 year-old arthritis sufferers in for treatments.

Really, just about everyone should try it!

+ Let’s get gossipy: any celebrities who are huge cryo fans?

+ How many times does someone have to do it to see results?

MB: We tell clients that they should listen to their bodies. Some people come in to recover after athletic exertion & may only need to come in according to their workout schedules. Others who are in pain may find more relief in 5 to 7 treatments in close succession.

Extended use really helps with the collagen production, & some of the auto-immune diseases.

+ I JUST LOVE the feeling you get afterwards. Tell me more about that “high.”

MB: That is the endorphin release.

When you get to that point where you want to get the heck out of the chamber — usually the last 30 seconds or so of the treatment, you will have a norepinephrine release in the brain of more than 400% which gives you that increased focus, & feeling of elation.

These are physiological reactions that are induced by the extreme cold. These neurotransmitters are associated with the euphoric feeling after exercise, sex, & even skydiving.

+ What should you do pre-cryo?

MB: There’s really nothing you need to do prior to a treatment. You cannot be wet, or have any oils or lotions on, but those can be wiped off prior to the treatment. Otherwise, you can work out prior and you’ll benefit from the quicker recovery. Some clients will go to physical therapy beforehand so that they can bring down a lot of the soreness.

Cryotherapy can also help you to relax your muscles & increase joint flexibility before heading into a chiropractic adjustment or massage.

MB: Enjoy the high. Often times our clients tell us about how they experience better workouts post cryo. They don’t fatigue as fast, which allows for longer training sessions, runs, bikes, etc. You gain increased mental focus & an overall sense of rejuvenation and wellness.

+ Lastly, why does everyone need to do cryotherapy?

MB: One of our first clients came in search of cryotherapy because his friend, one of LeBron’s trainers, told him that she believes it will add years to his life. There is some research that shows that reducing inflammation can have so very many benefits and could very much lead to increased telomere length, a genetic marker linked to aging.

…So it might just be the fountain of youth!

+ If you want to try a $30 session of cryotherapy, head in to Chiltonic in Hillcrest, California & use the code: ‘The Skinny Confidential CHILLS’ for the discount. Trust me, you’ll become addicted.

++ In the next couple of days, I’ll Snapchat some cryotherapy for you guys. Follow along, username: laurynevarts.

41 replies to “BRRR! EVERYTHING TO KNOW ABOUT…Cryotherapy”