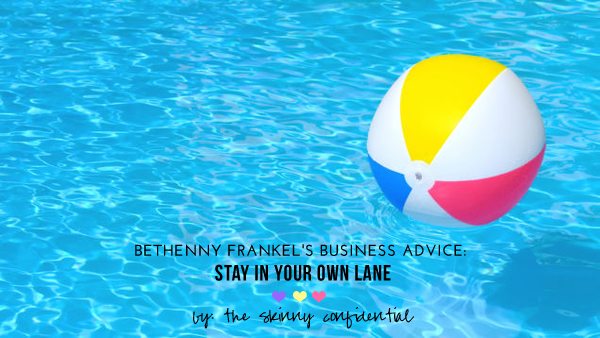 DID I MENTION THAT WHEN I WAS IN NEW YORK I MET BETHENNY FRANKEL?

Exactly how you would imagine but cooler.

A group of bloggers were able to pick her brain for a couple hours on her booming business ( Skinnygirl ), Housewives ( she loves Yolanda- but who doesn’t ), & her entrepreneurial journey, while we taste tested her new skinny cocktails.

Between Skinnygirl basil tangerine shots ( as good as they sound ) she asked if we had questions.

I had 4 million but I started with one:

WHAT’S YOUR ADVICE FOR WOMEN WHO ARE ENTREPRENEURS?

Her answer was SOOO unreal that I had to share it on TSC.

“BE LIKE MICHAEL PHELPS. STAY IN YOUR OWN LANE. KEEP SWIMMING FORWARD & DON’T WORRY ABOUT WHAT EVERYONE ELSE IS DOING. DON’T LOOK OVER AT OTHER LANES. JUST KEEP SWIMMING.”

Ummmmm. If that’s not badass LIFE advice I don’t know what is? For example, it’s so, so easy to get on Instagram & before you know it you’ve compared yourself to your friend’s cousin’s, sister who’s a supermodel in Milan, dating Bradley Cooper, & just inherited 80 mill.

I’VE BEEN THERE TOO.

And well, it’s hard not to compare yourself in general. It’s human nature.

Comparing yourself to others gets you nowhere if you really think about it. It takes your eye off your prize, your goals, your dreams.

Really though, it’s pointless & really doesn’t get anyone anywhere.

Anyway, I cannot BELIEVE how much I got out of hearing her say those few sentences. My whole perspective changed that night. I am NOT going to look in other swim lanes. I’m going to focus on my own damn lane.