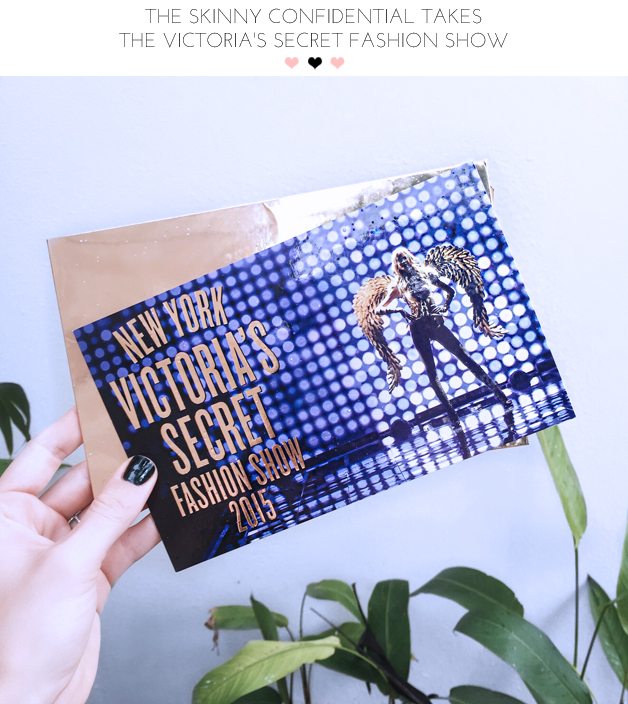 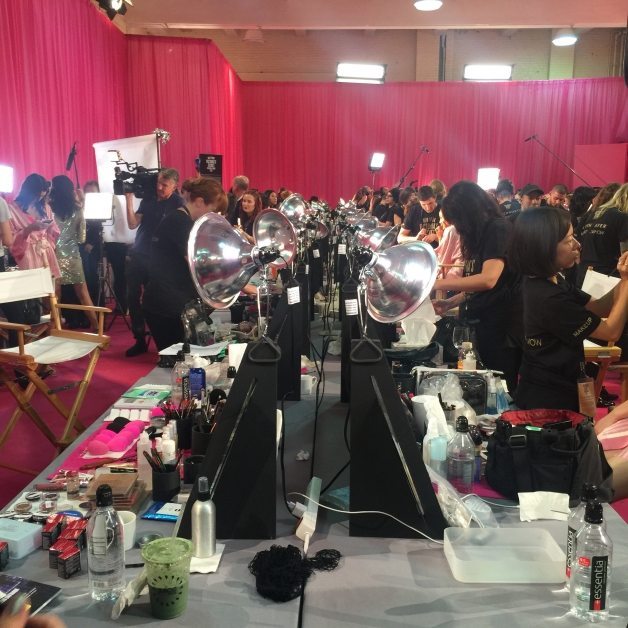 Going backstage at the Victoria’s Secret Fashion Show was a dream come true.

When I received the invitation I was super excited because you guys know I LOVE sharing women’s tips/tricks/thoughts with you guys. Collaborating is my thing.

The night before, my mind flooded with questions for the Angels. It was really important to go to the show fully prepared to report back to YOU. Eek. Here’s every little detail that I can remember ( thanks to my iPhone ‘Voice Recorder’ app & Snapchat! ):

Adriana Lima is kind of the most beautiful woman…ever? Her features are just really stunning. I asked her what she did to get ready for the VSFW & she said one word: “boxing.” Soooo…I’m going boxing on Thursday. Anyone want to join?

Adriana also said she does double workouts a few months before the show. DEDICATION!!

Ok honestly though, I’m surprised Adriana Lima is a real person. She looks fake. I mean she’s prettier in person than she is in pictures? Is that even possible? Crazy town. 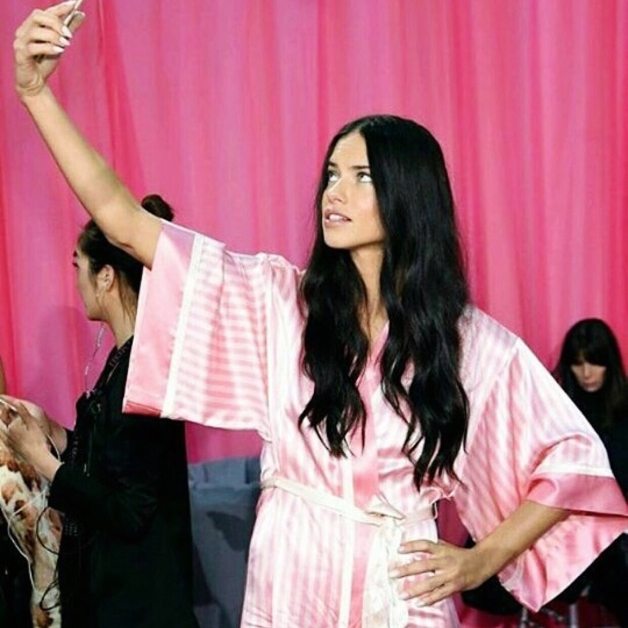 Lily Aldridge ( who wore the 2 million dollar ‘Fantasy Bra’ !!! ) said “her food intake includes a lot of protein, low-glycemic fruit, & veggies with absolutely no alcohol months before the show. She also said she practices “a lot of Pilates.”

I personally witnessed Gigi Hadid eat vegetable chips. And let me tell you there was a table full of food & fresh juices. I saw a few of the girls eat RIGHT before the show. One model was eating a mini sandwich on whole wheat bread. Another girl was eating an energy bar & dark chocolate. YES.

Basically they all said they ate. I talked to newcomer, Taylor Hill & she stressed the importance of how the girls “need to have energy for the show” so they have to eat. 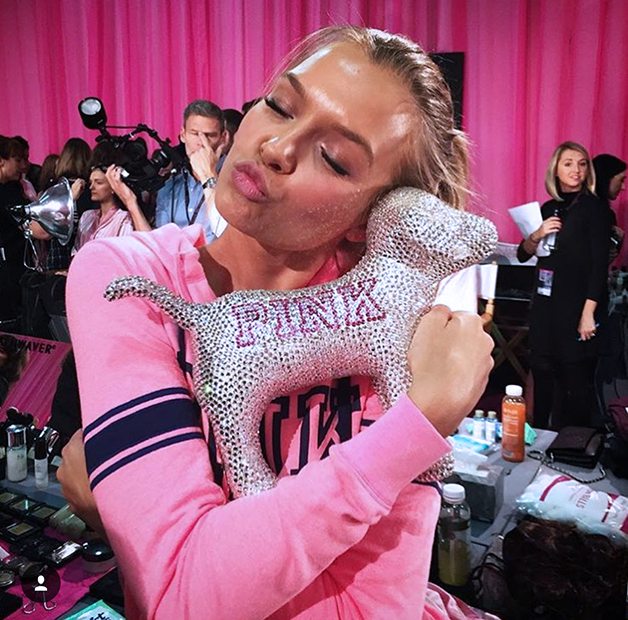 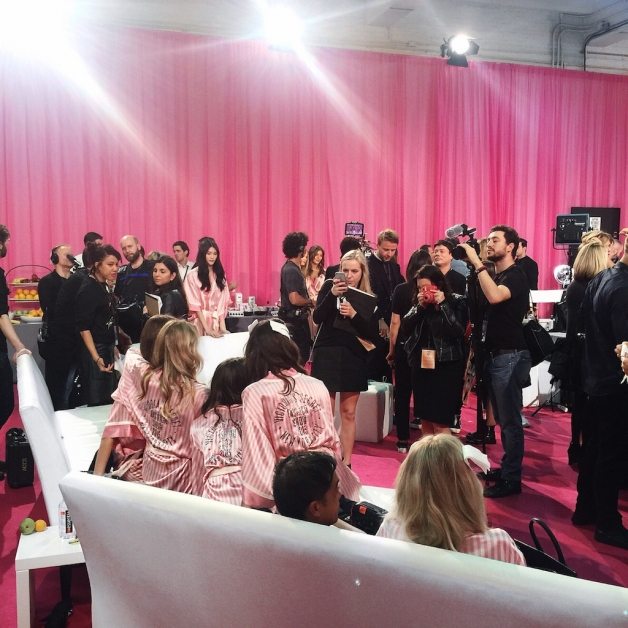 Shanina Shaik said she stopped drinking about two months before the show & had a lot of egg white omelettes for breakfast.

Top Angel, Candice Swanepoel is badass. She basically said she works her ass off in the gym. She also said she LOVES strength training.

Alessandra Ambrosio is HOT. But you already know that. Her butt is seriously ridiculous. She said she does lots of yoga, uses resistance bands, & LOVES sushi.

Elsa Hosk was the Angel I talked with the most. She was born in Sweden & has a beautiful accent. We took some pictures together but I look like a butthole ( the lighting wasn’t the best backstage ), so I’ll spare you guys. HA. Anyway, Elsa was sweet, soft spoken, & told me that she LOVES boxing. Again, I’m boxing on Thursday if anyone’s looking for me. She also said Victoria’s Secret is like a family & expressed her gratitude towards VS. She was so excited to be in the show! It was really cool. 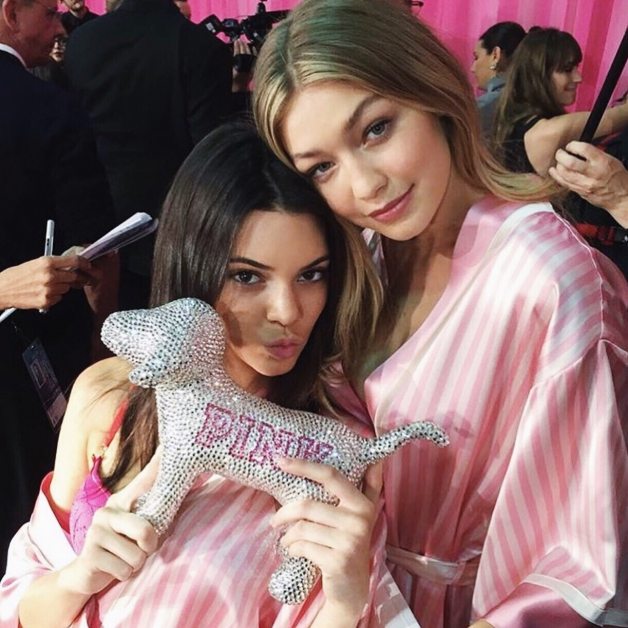 Kendall & Gigi!! Can’t forget about this duo, right? Ok so they were together texting & Instagramming on their phones ( A LOT of selfies were happening backstage ). They’re beautiful & their skin is absurd. It’s so dewy and perfect. I asked them their fitness/diet tips. They didn’t find out they were in the show until a week-ish before. Kendall said she was going “straight to a burger joint or pizza party after the show.” LOL. The night before, Kendall said she ate chicken & sweet potato ( just typing this is making me crave a sweet potato, YUM ). Miss Gigi said she has a weakness for cheeseburgers but she loves working out. She said she ( surprise ) “loves boxing & fresh green juices.” Gigi & Kendall seemed a little nervous ( but VERY excited ). They’re cute friends!!

As you guys saw on Snapchat I asked a bunch of the younger models about their diets. One beauty said her favorite pre-show snack was “rice cakes with a bunch of raw almond butter.” Here’s a little peek-ity peek at some Snapchat clips:

I talked to a bunch of different girls ( there’s a ton!! ) & they all said the regular things: lots of greens, lots of protein, double workouts, eggs, Pilates, SoulCycle, green drinks, & tons of water. Most importantly, a huge theme across the board: the Angels seemed to try to avoid processed food. Also, a lot of the girls are around 5’11.

There’s a TON of makeup, fake hair, alligator chips, & big-ass curlers backstage. A lot of the girls kept their hair in a hair net to hold their curls. Don’t worry guys, I’m looking into this ASAP for you to see if this is something we should all be doing? How did I not know about these lunch lady hair nets? Amazon-ing one now. 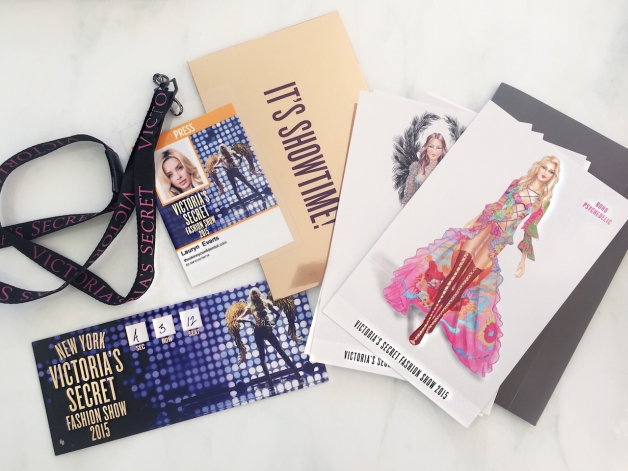 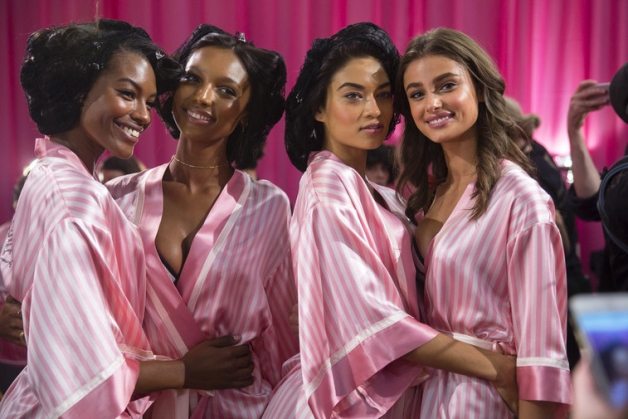 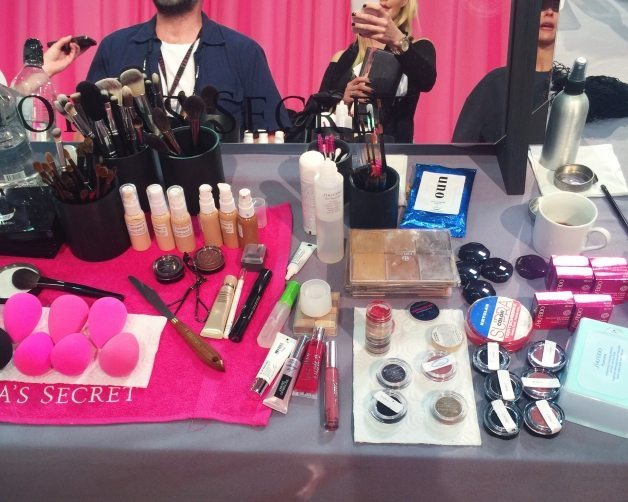 OH! And facials were a big topic of conversation backstage at the Victoria’s Secret Fashion Show. Like big, big. All the Angels are huge on facials. I heard a bunch of the models discussing how important their monthly facials are. And for the record, their skin is perfectly dewy without being oily. The majority of the girls said they wear SPF daily & wear a lot of coconut oil. One Angel told me she swears by tea tree oil & sprays mineral spray on her face everyday.

HERE’S the THING: I think a lot of people want to say “oh they’re just a pretty face.” But I’m here to tell you, WAIT! These girls are not just a pretty face. 1.) They’re super confident but not in a cocky way. 2.) They work their asses off. I mean it’s fucking dedication to eat well & whip your body into tip top shape. 3.) Their work ethic is inspiring. The prep for the show is NO joke. 4.) A lot of them ( in my opinion ) will go on to build a brand, so not only are they BEAUTIFUL, they’re smart. And 5.) most importantly, they were nice. They all let me talk to them & were kind, sweet, positive, & informative.

Pretty much I love what the show represents, STRONG, POWERFUL, BEAUTIFUL, BALANCED, COOL women who are killing it.

Also, all of women are so grateful to be part of the show. They all say how blessed & lucky they are. No one was a brat and every one sort of radiated good vibes. Super cool.

Ok, let’s talk about the actual show, shall we?

The show was spectacular. TONS OF COLORS. Great vibes. Not too long, not too short. And the models had PERSONALITY on stage. Honestly, this wasn’t like a Fashion Week where there were no smiles, quick walks, & a certain stiffness. The Angels were smiling, laughing, high fiving, & dancing. They were kind of flirting with the audience & the performers and blew a ton of kisses. Super fun! 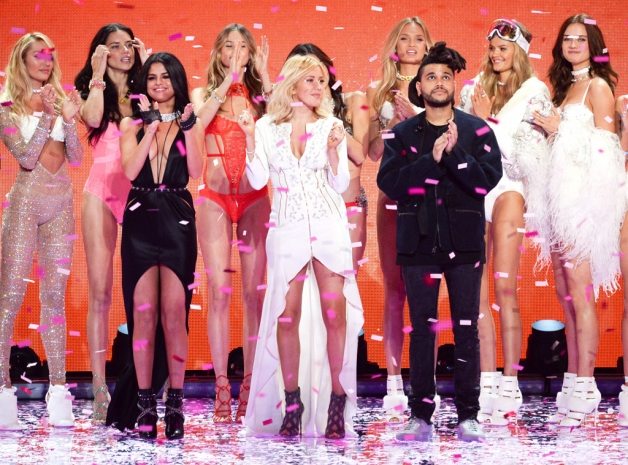 The performers were Ellie Goulding, The Weeknd, & Selena Gomez ( DIED for her ). All of them were fabulous.

Ok so, if I had to pick a favorite model it would be Taylor Hill. Her personality is adorable ( she was so nice too ) & she’s STUNNING. Like, damnnnn. Also, Behati Prinsloo’s runway personality was the cutest thing EVER. Her vibe is so on point. She was smiling super big & having the time of her life. She opened the show, which didn’t surprise me!

The show ended with a bang & all the women came on stage. It was a powerful ending & their confidence was contagious.

Later in the night, was the VS Afterparty. All the models go to the Afterparty but they don’t stay long, they’re in & out. The Afterparty was super cool to witness. My favorite dress was Gigi’s. It was to die. My girlfriend, Jana, did Gigi’s hair for the Afterparty in a low bun. I asked her how she did it & Jana literally said “it took two seconds, it was a low bun, & super low maintenance.” Anyway, Gigi was smoking at the Afterparty. She wore this cut out black dress that was so damn sexy, but not overly sexy. The bun was the perfect contrast to the dress. The event was held at Tao Downtown which had kind of a club vibe, but really reflected the VS brand because they had it set up with purple-ish, pink tones. A perfect ending to a perfect day! 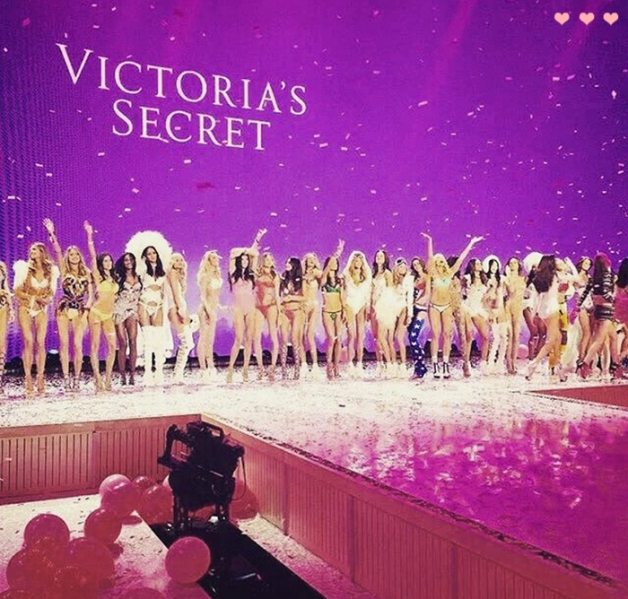 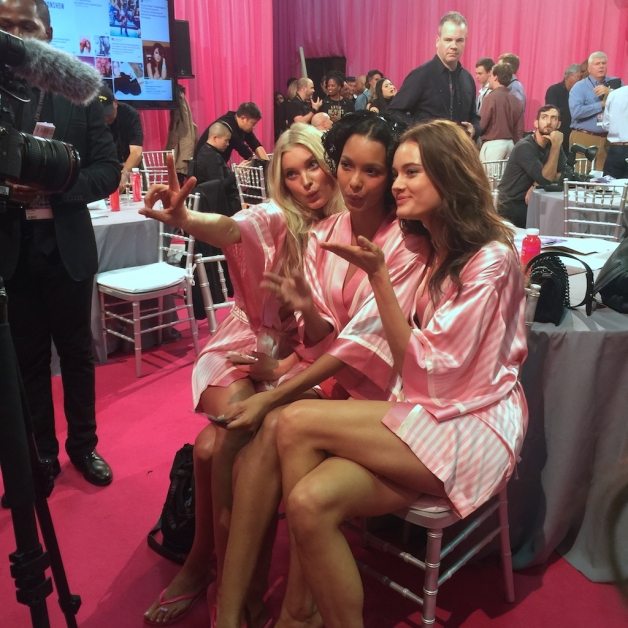 Ultimately, in my opinion these are not women who starve themselves. Quite the contrary, actually. They’re all strong, toned, confident women who are super inspiring. And it seems they’ve all busted their ass to become Angels. It’s not like they woke up one day & ended up walking the VS Fashion Show. Honestly, I left the show inspired. AND EXTRA inspired to do TSC Bombshell Body Guide ; ). Definitely will be sweating it out & upping my green smoothie consumption.

The show airs December 8th at 10 PM on CBS— you guys don’t want to miss it. The costumes are INSANE. And each model really shows her personality. You can get acquainted with the Angels here.

If you have any other questions that I missed, leave them below! I hope I covered everything for you guys : ).

The whole experience was magical & it’s really special to share it with all of YOU.

Ok I’m off to box, do squats, eat vegetables, & get a facial. 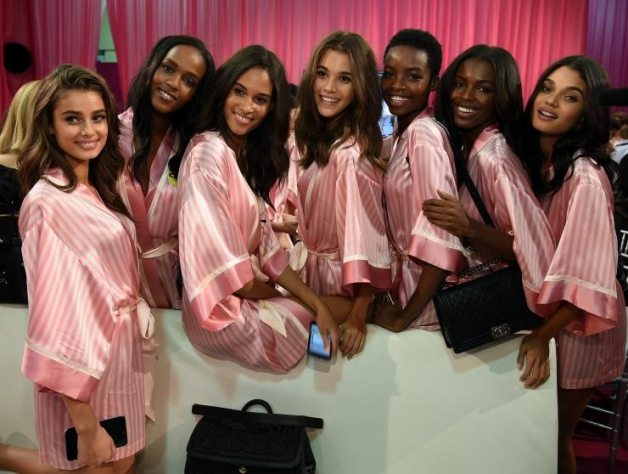 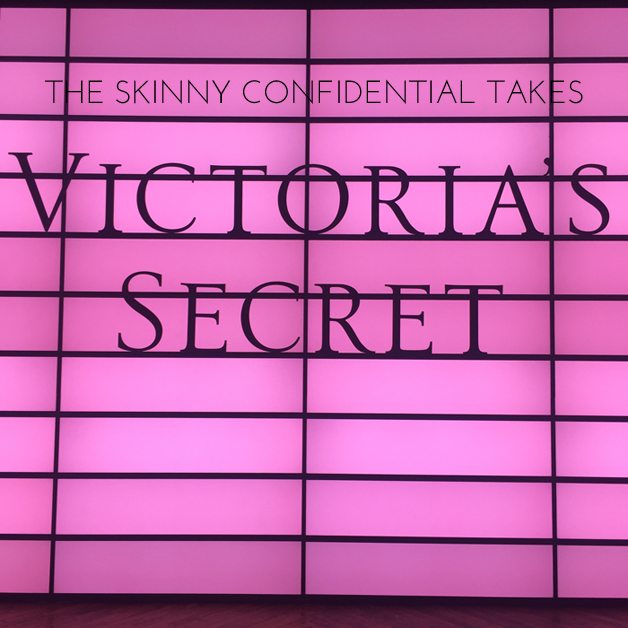