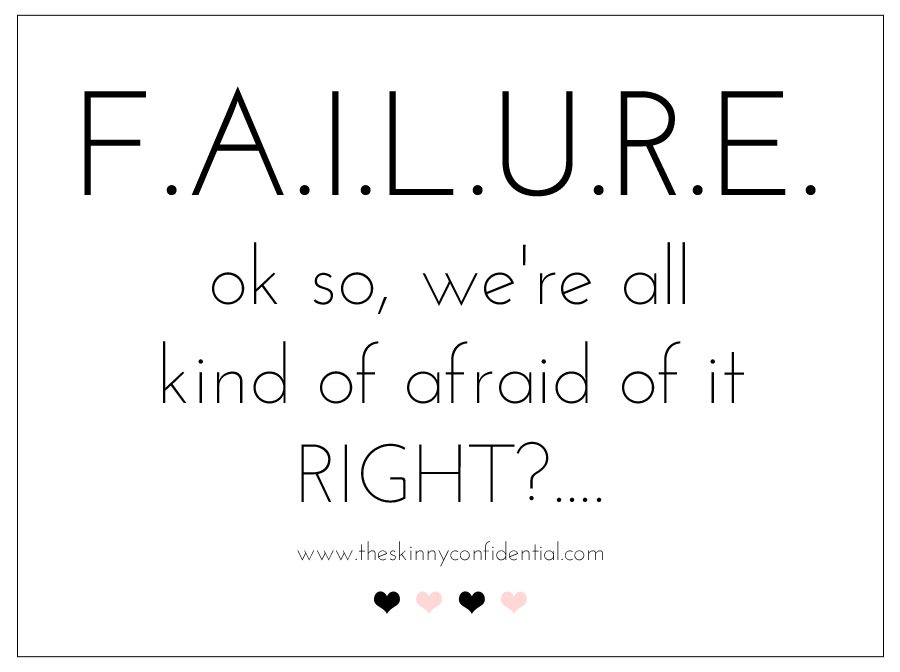 First things first, are you guys liking Michael on the blog?

I’m a fan because I feel like I listen to his advice on a regular basis. A lot of you ask ME questions that Michael has answered…for ME. I know, it’s devastating I haven’t had him on the blog sooner.

For instance, he told he me to pull the fucking trigger on The Skinny Confidential 5 years ago, & here we are.

Who gives a shit about failure, take a chance & TELL ME a story!

Today I want to switch gears & talk to you about something other than books and dating ( some of that may creep in here though ). I want to talk about the fear of failure.

The fear of failure in business, in life, in relationships, in anything!

I want to address & talk about fear and then I want to tell you WHY you should not be afraid and why fear can be great.

I remember speaking with my friend Danny in college, I specifically remember him telling me “this will be the greatest time of our lives” and I remember thinking…“what the fuck are you talking about?!” The biggest fear I had at the time was that was where life would end, that would be the high point, the point where it would all go downhill.

I remember getting heated about it and telling him that there was no possible way this would be the best part of my life.

Not because college wasn’t a good time, because it was, I have some great memories ( I went to the U of A…I’m a real academic ). I just remember thinking “after this I am going to do a lot more cool shit, I am going to take a lot of chances, and if college is as good as life gets, I don’t want to live.”

That’s pretty extreme I guess, but I just couldn’t imagine life slowing down.

I have always been a risk taker…I’m completely comfortable taking risks & chances. I don’t mind failure, it doesn’t worry me, I don’t lose sleep over it and I will tell you why: FAILURE is what makes you better.

The idea of failure is what keeps you sharp. When you fail you have a chance to learn & improve. Life is not going to be all wins and no losses. If it was, it would be VERY boring. If I know failure has the potential to make me better why should I fear it?

If you follow me on snapchat ( @michaelbosstick ) you have probably seen me on one of my many rants yelling at someone or anyone to get out there & take a chance!

Don’t get me wrong, I am not looking to fail and I am not telling you failing doesn’t hurt. It does.

All I am saying is “who cares?” There is this idea that failure is a really bad thing. Yea, losing money sucks. Taking a chance on a relationship only to find out it was a bad idea sucks too. So does sitting around never taking a chance and wondering “what if?”

I refuse to wonder. I refuse to go through my life on an easy road. I don’t want that life. I want to take chances; I have accepted that most of them won’t pan out. I also know that when it does, it will be AMAZING!!!

You want to start a new business? Great, quit talking to me about it and go execute. You’re scared it won’t work? Good, use that fear to drive you towards success. What’s the story you want to tell? “Hey I had this idea and I thought about doing it but I didn’t because I was scared.” Cool story? Or…“yea I had this idea in the back of my head & I tried it and it was really tough and I failed a couple times and life got hard but then I figured it out and now it’s this amazing thing and we are on a boat drinking champagne because of it.” Or maybe your dream takes you elsewhere, but I personally like boats and champagne!

Lauryn & I were at dinner years ago and she was telling me how she had this idea to write on the internet about her life and give simple tips to women and that she had an idea to eventually write a book and become a brand.

I had heard this same story maybe 15 times to the point that I was annoyed to listen. I told her to quit talking about it and go and TRY IT. It’s now called The Skinny Confidential…& I’m writing content to thousands of people because she took a chance. It’s her passion, she loves it, it has added a tremendous work load to her life but it has also been extremely fulfilling.

What if she didn’t take the chance? What if she had given in to the fear of putting herself out there and failing? That story would be very boring. It’s a story that she would not be proud to tell.

This doesn’t only apply to starting your own business it applies to everything. You have a great job? Do you deserve a promotion & raise? Are you playing it safe hoping to climb the ranks? Get out there and take a chance! What’s the worst that can happen? You get fired? Or maybe you don’t and BOOM! New position more money!

Do you want to approach that guy/girl but you are scared they will reject you? Who gives a shit! Take a chance again. Oh wait now you are engaged and have a life partner? BOOM! Again!

Failure will make you better, it will teach you, AND it will humble you.

These are all good things.

Michael, what if I go broke? Ok you’re broke. Start over, try again. I got rejected. Ok try again. My idea didn’t work the first time. Ok pivot & try again. That’s life; it’s not supposed to be one and done. It takes time, it takes persistence. Fear of losing will only lead to losing.

Bottom line, don’t be scared to fail. Be scared that you will never take the chance to fail. I wish all of you the best of luck in every aspect of your life!!!

Comment below & let me know how a failure made you better or led to something great! I want everyone here to see that there’s nothing to be afraid of.

205 replies to “Failure is Just Crucial | by Michael”